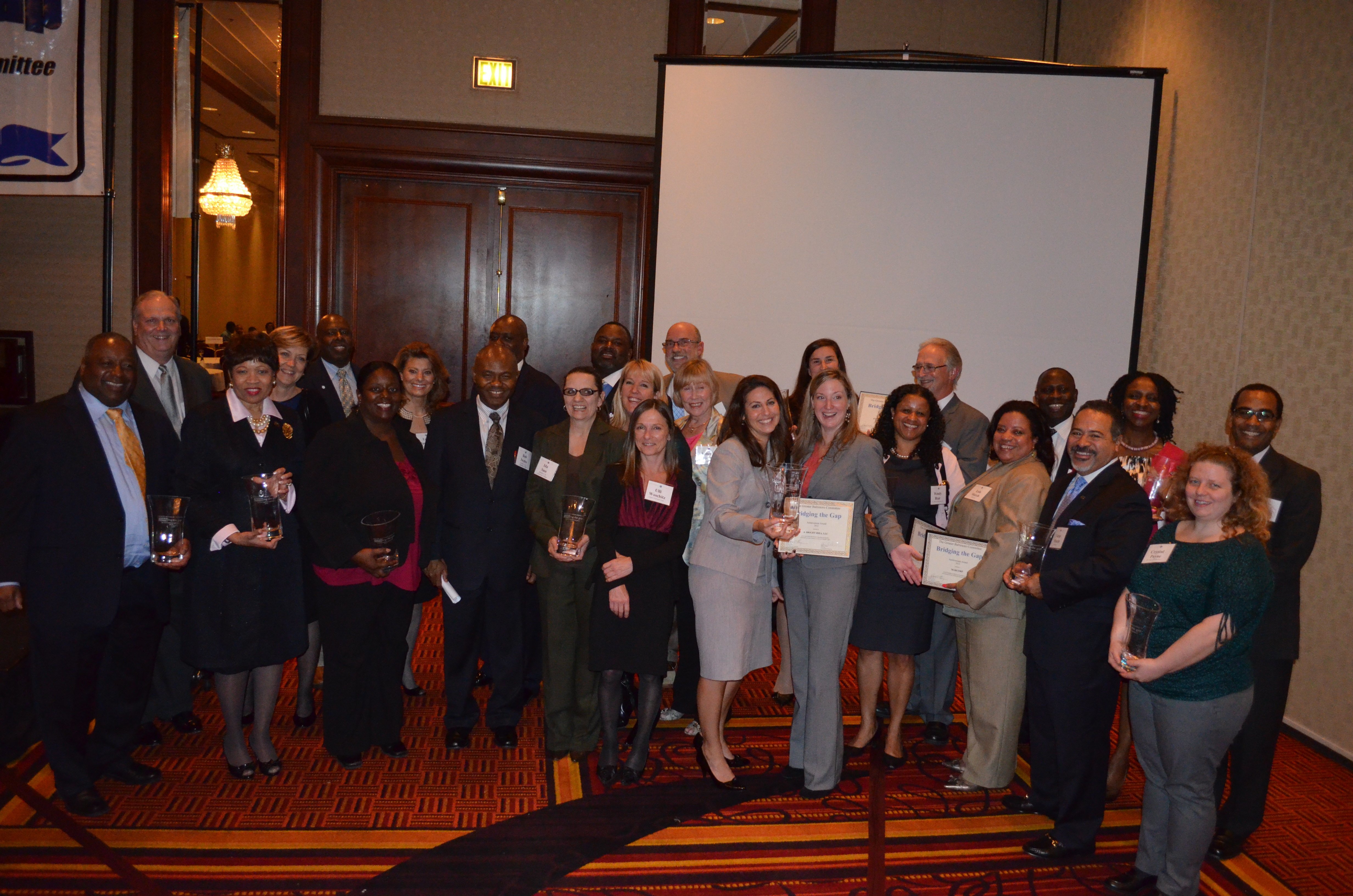 Fifteen Baltimore-area companies and one individual have been named winners of the Greater Baltimore Committee’s 9th annual Bridging the Gap Achievement Awards.

The awards were presented during October 23 ceremonies honoring minority-owned and women-owned firms for business achievement and others for their efforts to strengthen minority business development. The event was held at the Renaissance Baltimore Harborplace Hotel.

The awards program is part of Bridging the Gap, a minority business development initiative of the Greater Baltimore Committee, the region’s most prominent organization of business and civic leaders.

“Maryland can only reach its full economic potential if all businesses are engaged and thriving,” said GBC President & CEO Donald C. Fry. “By honoring these motivated, successful minority and women entrepreneurs, we seek to call attention to the many more in our region and state who exemplify the kind of private-sector energy that powers our economy.”

Categories and winners of the 2012 Bridging the Gap Awards are:

Achievement by a minority or woman-owned business

• Calmi Electrical, Baltimore, Md. Since its founding in 1986 by its CEO, Calvin Mims, this electrical contracting company has evolved into a leading firm with installation projects that have included M&T Bank Stadium and Oriole Park at Camden Yards.

• Fyodor Biotechnologies, Baltimore, Md. Founded in 2008, this company focuses on development of diagnostic and biopharmaceutical products targeted to impacting the way malaria is diagnosed and managed in “frontier” overseas markets.

• Intelect Corporation, Baltimore, Md. Founded in 1995 by Rohit Patel, who was born in Zibabwe, this technology design and engineering firm is now on Fortune Magazine’s list of 100 fastest growing U.S. urban businesses.

• Marcorp, Baltimore, Md. During its 50-year history, the March family has grown this minority-owned business from a single Baltimore City location into the largest independent funeral home operator on the East Coast.

• W. L. Blair Development, Baltimore, Md. Launched in 1995 by Wendy Blair to pursue opportunities as one of Baltimore’s few female urban developers, this firm’s projects now include developments in Bolton Hill and the Inner Harbor.

• Walters Relocations, Inc., Baltimore, Md. John Walters started this company in 1988 with one truck and one crew. The company now has a fleet of trucks, 35 employees and customers that include BGE, Mercy Hospital and Baltimore City government.

• Goodwill Industries of the Chesapeake and Baltimore City Community College, Baltimore, Md. Goodwill partners with BCCC to provide students life-skills training and to connect students who have completed the college’s workforce training to minority and majority-owned employers in Baltimore.

• Sally MacConnell, vice president for facilities, Johns Hopkins, Baltimore, Md. MacConnell is being recognized for her work as vice president for facilities at Johns Hopkins Hospital and Johns Hopkins Health System, where she has championed minority-owned and women-owned business participation in major contracting projects. Her efforts have helped Hopkins achieve a game-changing shift in the way it does business in the community and provide a roadmap for other large organizations to improve economic inclusion efforts.

See photos of the event on the GBC’s Facebook page.

Pictured: GBC Board Chair Calvin Butler, Thomas Friedman, GBC Vice Chair Mary Ann Scully and GBC President & CEO Don Fry.   Join the Greater Baltimore Committee for its 66th Annual Meeting, the state’s premier business event of the year. Thomas L. Friedman, the foreign affairs columnist for the New York Times, and the author of seven bestselling books, including “Hot, Flat, and Crowded” and “The World Is Flat,” will … Continue reading →
May
26
Wed
9:00 am GBC Newsmaker Speaker Series: A... @ Webinar via Zoom
GBC Newsmaker Speaker Series: A... @ Webinar via Zoom
May 26 @ 9:00 am – 10:00 am

Please join the GBC and Baltimore Police Commissioner Michael Harrison for a conversation on how the Baltimore Police Department and other law enforcement agencies across the country are addressing the calls for major police reform. Commissioner Harrison, who was appointed to the U.S. Conference of Mayors’ Police Reform and Racial Justice Working Group, recently appeared on Meet the Press to discuss the issue of police reform in America. Topics to … Continue reading →
Jun
9
Wed
8:30 am Transportation and Mobility Comm... @ Virtual Meeting via Zoom
Transportation and Mobility Comm... @ Virtual Meeting via Zoom
Jun 9 @ 8:30 am – 10:00 am
To RSVP to committee meetings, email Tara Harris. Zoom registration links will be available prior to each meeting.
View Calendar
Add