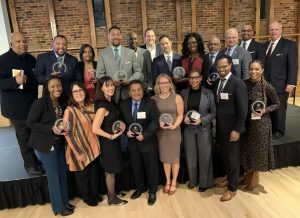 The 2019 Bridging the Gap Achievement Awards winners were announced at an awards ceremony on November 18 at the American Visionary Art Museum. Greater Baltimore Committee President and CEO Don Fry opened the event by saying, “The Greater Baltimore Committee is honored to recognize so many outstanding companies and business leaders from the Greater Baltimore Region.” Fry explained the genesis of the Bridging the Gap program, which dates back to the 1990s. During a conversation between Fry and Maryland legislators Howard “Pete” Rawlings and Elijah E. Cummings, a seed was planted.

“One of the first initiatives of the GBC Bridging the Gap program was the creation of the Achievement Awards, recognizing and honoring companies and individuals that are contributing to the growth and success of minority and women-owned businesses,” Fry said. This was important because “minority and women-owned businesses are an integral part of our national, state and local economy.”

In a special announcement toward the end of the evening, Fry presented this year’s President’s Award to the late Congressman Elijah Cummings.

“Congressman Cummings was an inspiration for the start of the GBC Bridging the Gap Program,” Fry said during the presentation. “He also worked tirelessly for his entire political career for the advancement of minorities and women. He believed that …’diversity is our promise, not our problem.'” Cummings’ daughter, Jennifer, accepted the award on behalf of the family.

Fry announced that the President’s Award has now been renamed the Elijah E. Cummings Leadership in Diversity Award to honor the late Congressman.

The GBC congratulates all of the 2019 winners:

Thank you to the event sponsors: