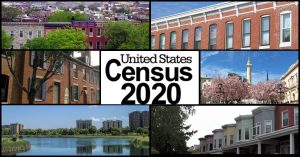 2020 Census Data released August 12, 2021, indicated that less than half of Marylanders now identify as white and showed that Baltimore’s population continued its decades-long decline, falling to 585,708.

“The continued trend in population losses for the City of Baltimore is disappointing but, unfortunately, was anticipated. Nevertheless, it is unacceptable for a city with the many positive attributes Baltimore has, from its affordability, diversity, strong neighborhoods, historical and cultural attractions to world class healthcare and universities, to lose residents. Although the city has challenges, it has the attributes to attract population.

This is an important time for the business community and city stakeholders to establish a sustainable strategy to grow the population and move forward with a sense of urgency. This can’t be a one or two-year deal. It must be a long term commitment by the city.

A lot is riding on Baltimore’s population figures. For one, fewer residents will mean a smaller tax base for the city to generate tax revenues that support city operations and services. Meanwhile the federal government allocates funding for such programs as Medicaid based on a jurisdiction’s population. There’s also the issue of blight associated with residents that have vacated or abandoned homes.

The bottom line is the continued population decline for Baltimore should be viewed as an urgent issue that must be given the significant thought and the resources that are required to turn the tide.”

Read news coverage and more about the 2020 Census results here: