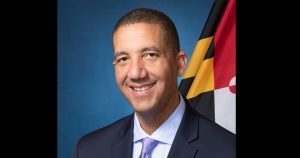 Prior to his work with the administration, Mitchell served as a member of the House of Delegates representing Baltimore City’s District 44 from 2011 to 2015, and represented District 11 in the Baltimore City Council from 1995 to 2007.

GBC: What was the Administration’s most consequential accomplishment in the 2021 Legislative Session?

KM: At the start of the 2021 legislative session, Governor Hogan introduced the Recovery for the Economy, Livelihoods, Industries, Entrepreneurs, and Families (RELIEF) Act, which provided more than $1 billion in targeted tax relief and economic stimulus for families and small businesses. The RELIEF Act of 2021 passed within 30 days of the start of the legislative session, with nearly unanimous support from the legislature.

What was the biggest disappointment in the 2021 Legislative session?

With the rising violence occurring, particularly in Baltimore City, the legislature had an opportunity to address repeat violent offenders who use a gun in the commission of a crime. Legislation introduced in the Senate would include tough sentencing for people who commit crimes with guns.

What are the Administration’s priorities/plans for 2022 session, and are there any legacy items Governor Hogan plans to pursue during his final session in office?

The 2022 legislative session is in 8 months. While specific plans for the governor’s legislative agenda are premature at this time, our administration will continue to focus on reducing fees and taxes on hardworking Marylanders. The governor will also continue to prioritize improving the state’s infrastructure with the widening of the Capital Beltway and lowering the overall cost of doing business in the state.

In your opinion, what is the one policy direction that the General Assembly should enact that would make the State more competitive?

What is the most significant policy issue not being addressed by the State or not getting the attention it deserves?

“5 Questions with …” is a monthly feature in which we ask a key figure in the Maryland legislative arena five questions about policy goals from past and future sessions.