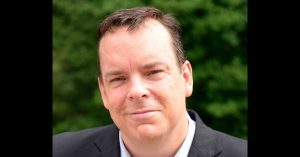 Michael Sanderson, Executive Director of the Maryland Association of Counties, has been with the organization for 27 years, serving as the Legislative Director from 1994 until 2009, when he became the Executive Director. Prior to his MACo career, he served as Committee staff to the House Ways and Means Committee as a Department of Fiscal Services employee. Sanderson is well respected in Annapolis as a leading voice for local governments. We are pleased that he was able to take time to answer our questions as he and his staff prepared for the annual MACo Summer Conference in Ocean City.

GBC: What was MACo’s most consequential accomplishment in the 2021 Legislative Session?

Michael Sanderson: This was a big year for broadband rollout, and our counties were a big force behind all of that. The pandemic really exposed the need, in every corner of the state, not just out-of-the-way areas, to make more connections to high-speed internet. Who wasn’t moved by hearing stories of school children being driven to the parking lot of a fast food restaurant so they can finish their remote school homework? This was the year that really took hold, and we got a lot done.

There are going to be more resources and experts available throughout the State to serve every part of Maryland — that’s a good step, redoubling a commitment we’ve made for years. We also were behind a “dig once” bill I think will become a national model — basically saying that in Maryland, when you’re digging up a road to access underground conduits, you need to notify anyone else who might have that same space in their development plans, so we can save time and money by avoiding doing it all over again a year later.

What was the biggest disappointment in 2021 for MACo and Maryland counties?

Well, at every level the process of conducting public business was less than perfect. Our counties had that struggle, but the General Assembly did on an even greater scale. We tend to thrive based on strong relationships, in part because state legislators and county officials really all serve the same people. We deliver most of the things at the local level that residents and voters really care about. So … while the State did its work, I think it felt distant to nearly every stakeholder, not just counties.

One example is election administration. I think there were some “lessons learned” from 2020 (and the years leading up to it) that could have set up some helpful reforms in election oversight and decision-making. Not the headline-grabbing things we’re seeing in other states, more practical and functional … but still important. In a regular year, I think we could have rolled up sleeves and gotten it done. In 2021, it just never came together. And these things are always easier to do when there’s not an election right around the corner.

What are MACo’s priorities or plans for the 2022 session, and will the fact that it is the last session of the legislative term impact what you think you can accomplish?

The contours of an election year are always important. And the district-drawing process, happening in the same year, further compounds that. As we’re still thinking about the Olympics, it’s a bit like adding two extra twists to a dive that was already a high difficulty to begin with.

MACo will approach the session with its own initiatives. That process is still underway, but I will highlight one thing we are thinking about. Our county elected officials are often put into a tough position where they make decisions that will upset some residents. State law recognizes this, and says it’s not fair for someone to make a threat or intimidation based on that sort of public service. You can’t call up your Council Member or Senator and ominously say, ‘If you vote for that bill, you and your family are going to pay.’ But that doesn’t extend to other decision-makers — who sometimes get those calls, too. The health officials making determinations about emergency status or masking rules, the professionals who oversee our elections — they are getting those calls, too, and I think we need a sensible law to protect them.

In your opinion, what is the one policy direction that the General Assembly should enact that would make the State more competitive for economic growth?

Our small-scale infrastructure is not exciting. Breaking ground on a huge new highway gets you a big headline. Spending the same resources to re-pave miles of local roads and strengthen their bridges won’t even make the paper. The same goes for the investments in our water treatment plants, regional airports and solid waste facilities. They are quiet but important contributors to quality of life. You can go a few years without tending to that sort of thing, put off maintenance and so forth, but at some point, you need to go back and make it right.

Let’s hope that the federal leadership can pull together and find resources to help on that front, and that Maryland can do the right thing and recognize that some of these boring, everyday projects are in fact very important and very urgent, especially after going a long stretch without enough attention, in my view.

What do you think is the most significant policy issue not being addressed by the State or not getting the attention it deserves?

We are all grateful for the frontline workers who came to everyone’s rescue as part of this pandemic. I hope we can leverage all that affection to some real life support. Some of that can, and should, be part of the recovery funds in the pipeline now. But the State must be a central player for the long haul.

We have our county health departments sending one another faxes to share information on the spread of COVID, because they don’t have technology that’s even close to current. We have volunteer fire companies that can’t find the next generation of staff to respond to our calls for help. We have EMTs who show up by ambulance and revive their neighbor from an overdose, but are then told that what they delivered wasn’t even ‘health care’ and isn’t worthy of payment. We at MACo are good at highlighting a best practice here, and a good program there … but the State needs to be the leader in making sure we’re delivering everywhere. Our front lines need and deserve some help.

“5 Questions with …” is a monthly feature in which we ask a key figure in the Maryland legislative arena five questions about policy goals from past and future sessions.