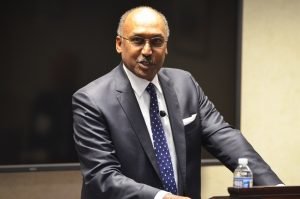 If officers are doing their jobs the way in which they were trained, there shouldn’t be an issue, Thompson said.

“It’s up to the department to train these police officers so that they feel comfortable doing what they’re doing,” he said. “I reject this notion that the Consent Decree is somehow restricting their ability to enforce the law because it doesn’t. We’re not telling them who to arrest, how to arrest; we’re just telling you whatever your instructions are and whatever your strategy is, just make sure you do it where you don’t violate the Constitution. I don’t think that’s asking too much.”

Thompson is impressed with Baltimore’s new police commissioner, Michael Harrison. The two men have spent time together since Commissioner Harrison was sworn in in March as Baltimore’s top cop.

“I think we were so lucky to get him,” Thompson said. “I think he is the right person at the right time for this city. I don’t think we could have created a better police commissioner.”

Commissioner Harrison’s experience working with a Consent Decree when he served as Superintendent of Police of the New Orleans Police Department is beneficial for Baltimore, Thompson said.

“He’s got it – the experience – working with a Consent Decree, which is really important,” Thompson said.

“He was in internal affairs for 10 years,” Thompson said. “Here’s a person who understands how that works and I think he’s got some great ideas in terms of how to make that unit much stronger and much more effective.

“He’s got the right personality,” Thompson said. “I know he’s not a miracle worker. You’re not going to police your way out of crime.”

The business community can assist the Baltimore Police Monitoring Team when it comes to the Consent Decree as well as promoting and sharing positive stories about Charm City.

“Spreading the word is one way,” Thompson said. “It’s important that the business community buy into the Consent Decree. The Consent Decree aside, we don’t promote the good stuff. This is a great city.”

Thompson challenges the business community to do a better job promoting Baltimore.

“If you can get the community to understand that the Consent Decree is designed to reform the police department where it becomes a better police department, where it’s effective, where it can fight crime better because people will be more inclined to help,” Thompson said. “That should be a good thing.

“The Consent Decree is a good thing,” Thompson said. “The Consent Decree is designed to build the trust gap between the police department and the community. Why is that important? In my view that’s the best way to, at some point in time, effectively fight crime. If you’re not going to get cooperation from the residents, then you’re never going to be able to solve these 300 plus crimes or murders every year.”