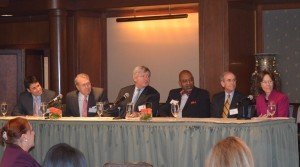 This year’s program builds on the achievements of year one and includes the original cadre of six CEOs, plus the six additional CEOs.

The executives participating in 2015 are:

At an upcoming November breakfast, these six new executives who pledged to provide leadership within their companies will share their successes and discuss the importance of the cause.

In an effort to fight diabetes and promote wellness in the workplace, in 2013 the ADA’s Maryland Chapter partnered with the Greater Baltimore Committee and launched the ‘CEOs Stopping Diabetes’ initiative to engage six regional CEOs and their employees by promoting aspects of their company’s wellness activities, such as screenings, walking and cycling programs.

Last year the GBC’s Health Care Committee formed an exclusive partnership with the ADA Maryland Chapter in a year-long pilot program ‘CEOs Stopping Diabetes.’ Data has shown that when CEO’s personally lead corporate wellness programs the results improve dramatically in terms of compliance. The GBC recruited six of its CEOs to take part in this program. Each CEO was encouraged to initiate and lead his or her own programs to promote corporate wellness.

Donald C. Fry, president and CEO of the GBC, said initiatives such as ‘CEOs Stopping Diabetes’ help to raise awareness in the workplace about the importance of making small changes to live a healthier life.

“Corporate wellness is paramount to productivity in the workplace,” Fry said. “When you have healthy employees, it’s a win for the employee and the company.”

Each executive will choose and then implement three proven strategies to prevent or reduce the incidence of diabetes in his or her workplace. The CEOs have already submitted activity plans to the ADA for the year.  They include “lunch and learns” on healthy cooking, cycling activities, in-house screenings and weight management programs. The CEOs are encouraged to tailor their programs to reflect the culture of the individual company and the preferences of employees.

“We are building this program year by year, but the foundation for this program is based in fact,” said Kathy Rogers, regional executive director of the Maryland and Western Pennsylvania Chapter of the ADA. “When CEOs lead wellness efforts in the workplace, the results are markedly improved.”

The incidence of diabetes is increasing in Maryland. The American Diabetes Association, Maryland Chapter, reported in November 2014 that nearly 400,000 Marylanders had diabetes and a staggering 1.2 million people with prediabetes were at risk for developing the disease. Less than one year later, the ADA Maryland Chapter reports that more than  618,000 people in Maryland are living with diabetes and the nearly 1.6 million people with prediabetes are at risk of developing the disease.