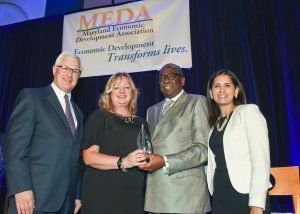 The Maryland Economic Development Association (MEDA) announced the recipients of the 2017 MEDA Awards, which celebrate the people, projects, and programs that are transforming lives by creating opportunities, inspiring innovation, and enriching communities across the state. Arnold Williams, the managing director and founding partner of Abrams, Foster, Nole & Williams PA was honored as the MEDA Volunteer of the Year.

The Baltimore Development Corporation (BDC) nominated Williams for the award. A BDC board member for more than 20 years, Williams has been a leader for a variety of different nonprofit organizations such as Associated Black Charities, Baltimore City Chamber of Commerce, Boy Scouts of America, Greater Baltimore Committee and the United Way of Central Maryland.

James T. Brady, chair of the Board of Regents of the University System of Maryland was inducted into the MEDA Hall of Fame. Brady was recognized for his leadership skills and contributions that have excelled the practice of economic development throughout his career.

The Smith Island Baking Company earned the Economic Development Project Award in the small community category due to its origins and expansion. The business opened in 2009, and since then has shipped tens of thousands of cakes to all 50 states and even seven countries.

City Garage, an incubator and maker space for the entrepreneurial community was originally a maintenance facility for City vehicles. The creative re-use of the building earned the establishment the Economic Development Project Award in the large community category.

Charles County Economic Development Department earned the MEDA Marketing Award in the small community category for their innovative use, design, and promotion of their Map Pen Campaign. The social media campaign encouraged residents to make the Map Pen part of their summer travels and submit photos to share on the Department’s social media channels.

Datastory Consulting created an interactive presentation that was shared with the Marriott International team as a way to keep Marriott’s headquarters in Montgomery County.  The marketing project entitled Data-Driven Decisions Through the Lens of a Map earned the MEDA Marketing Award for a large community due to its innovative way of simplifying big data.

The Awards Banquet was held May 1 during the 2017 MEDA Annual Conference at the Hyatt Regency Chesapeake Bay in Cambridge, Maryland.

MEDA is a nonprofit organization of economic development professionals. Established in 1961, MEDA members promote the economic well-being of Maryland by working to improve the state’s business climate and the professionalism of those in the field of economic development. MEDA’s membership includes economic development practitioners employed by government, businesses, and chamber of commerce and other professionals with interest in the economy of Maryland. Through its regular meetings, special programs, and projects, MEDA member address such diverse issues as local planning, workforce, transportation, international trade, tourism and finance. MEDA members work diligently transforming lives by creating opportunities, inspiring innovation and enriching communities in Maryland. To learn more about MEDA, click here.