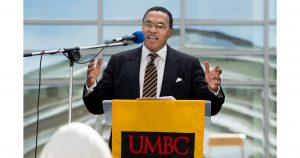 The following is an excerpt from the complete Baltimore Business Journal article.

Freeman A. Hrabowski III has spent the last 30 years in the president’s seat at University of Maryland, Baltimore County. Following the spring 2022 semester, he will step down.

UMBC announced Aug. 25 that Hrabowski, a longtime pillar of the Greater Baltimore business community and an outspoken advocate for diversity and inclusion in higher education, will retire at the end of the current academic year. He has led the institution through a period of significant growth and has placed special emphasis on elevating science and math education, and on increasing participation and achievement among underrepresented minority students.

Hrabowski has served in leadership roles at UMBC for 35 years. He initially came to the school to serve as vice provost, then was ultimately elevated to the role of president in 1992.

During his tenure, UMBC’s six-year graduation rate for full-time freshmen rose from 55.7% to 69.2%. Cumulative investment in campus construction has also increased from $118 million to $1.2 billion, and the school’s annual research and development spend has grown from about $10 million to over $84 million. UMBC currently employs 931 faculty and has an enrollment of 13,497 students, 52.1% of whom are from minority backgrounds. Enrollment at the university grew by 4,000 students during his tenure as president.

Baltimore County Executive Johnny Olszewski, a UMBC alumnus, said in a statement Aug. 25 Hrabowski’s leadership “has been transformative for so many students, for Baltimore County and for our entire state.” He thanked the outgoing president for his decades of service and devotion to “expanding access to educational excellence, sparking innovation, and promoting equity.”

Donald C. Fry, President & CEO of the Greater Baltimore Committee, described Hrabowski’s tenure as a leader in the higher education sector as “nothing short of remarkable.”

“He transformed UMBC from a respected local institution to a university of considerable national stature, known for its innovation, science and technology programs and its culture of excellence,” Fry said of Hrabowski, who was a GBC board member from 1994 to 1998. “His body of work will serve for generations as an iconic role model for emerging leaders in academia and beyond.”