Making sure the Preakness Stakes stays in Baltimore must be one of the top goals for the General Assembly this year, Sen. J.B. Jennings told a group of regional business leaders on Jan. 27.

Jennings, a Republican who represents Harford and Baltimore counties, has spoken candidly about Baltimore City’s crime issues during each of the last two years at the Greater Baltimore Committee’s annual legislative forum. The Senate minority leader again spoke about crime — basically saying that nothing has changed and that something needs to be done to address the issue — but he also wanted make sure the effort to save the Preakness was not forgotten.

Lawmakers will consider a bill that would codify a deal reached by the city and the Stronach Group, the company that owns the Pimlico Race Course and Laurel Park tracks, to turn Pimlico over to a new nonprofit entity and rebuild it.

Under the proposed plan, Pimlico would undergo a $199.5 million upgrade and be used for major events like the Preakness and the Breeders’ Cup. Laurel Park Laurel would receive a $173.4 million upgrade and become the day-to-day center for Maryland thoroughbred racing. Money to pay the debt service on bonds for the project would come from a variety of sources, including casino-funded subsidies already dedicated to horse racing.

“For Baltimore, we need to make sure it happens,” Jennings said. “We do not want to lose this track or this race.”

Del. Eric Leudtke, a Montgomery County Democrat who is also the majority leader in the House of Delegates, spent most of his time talking about a multi-billion-dollar public education reform plan. However, he also said the House is committed to keeping the Preakness in Baltimore and ensuring there is equitable development in the nearby Park Heights area.

“This is not just about horse racing,” Leudtke said. “It’s about a commitment to the people of Baltimore.”

Del. Stephanie Smith, chair of the Baltimore City House Delegation, offered a similar sentiment to what Leudtke said. Senate President Bill Ferguson did not talk about the Preakness when discussing the Senate’s top priorities. However, his office is working on drafting the proposed bill regarding the racetrack improvements that the Senate will consider.

Maryland Commerce Secretary Kelly Schulz, the other speaker on the five-person panel, was asked about Gov. Larry Hogan’s administration’s stance on the proposed Pimlico deal.

Schulz did not say whether Hogan supports the proposal, but said the administration supported the Maryland Stadium Authority’s study looking at redevelopment options for the track. She also said the administration has been consistent in wanting to see the city and track owners come together on a path forward. Schulz said she was “so pleased” when she received phone calls notifying her of the agreement. 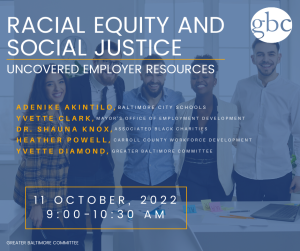 A connected and thriving workforce ecosystem is a key component to the Baltimore region’s economy. GBC’s commitment to the region’s employers is highlighted in their commitment to the Preparing for the Future Workforce Development Initiative. This initiative is working to build stronger bridges between employers and job seekers. The approach by the GBC centers around the employer’s needs, contributions, and opportunities. It also uncovers funding and resources available to employers as … Continue reading →
Oct
20
Thu
10:00 am GBC NEWSMAKER: MEET ME IN THE ME...
GBC NEWSMAKER: MEET ME IN THE ME...
Oct 20 @ 10:00 am – 11:00 am 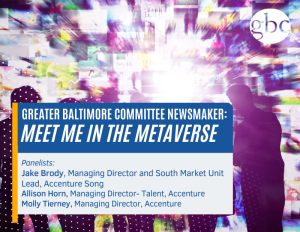 The Metaverse is here! It is changing the way we learn, earn a living, shop and connect. Are you ready? Join the Greater Baltimore Committee and executives from Accenture to learn about the Metaverse, ways to use the platform for employee engagement, training, e-commerce and why it is important to address the future needs of businesses and employees. Event Date: Thursday, October 20 Time:10:00-11:00 a.m. Price: $25 for members and $45 … Continue reading →
View Calendar
Add