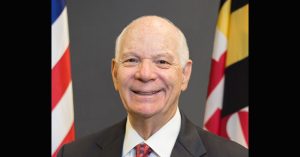 Two of Baltimore’s top political leaders have talked about reviving the Red Line, a $2.9 billion light rail project killed by Gov. Larry Hogan six years ago that would have provided east-west connectivity through the city.

The decision by Hogan, a Republican, to pull the plug on the Red Line after taking office in 2015 has been a point of consternation for Baltimore Democrats, civil rights activists and transit advocates. By withdrawing from the project, Maryland forfeited $900 million in federal funding. The 14-mile line, which would have run from Woodlawn in the west to Bayview in the east, had been in planning for years, and the state had already spent close to $300 million.

Some Red Line supporters have held out hope that the project could be rejuvenated. U.S. Sen. Ben Cardin provided some reason for optimism on July 26 during a transportation and infrastructure summit hosted by the Greater Baltimore Committee, telling business leaders he has had conversations with Baltimore Mayor Brandon Scott about bringing back the Red Line.

“Quite frankly, and I’m going to say this, I’ve talked to the mayor, we would like to move back with the Red Line,” Cardin said. “We would like to have the capacity to connect communities and to have a stronger rapid-rail system in the Baltimore region. All of that requires an investment in transit.”

Cardin was responding to a question about why he and other lawmakers are placing an emphasis on transit as Congress negotiates a $1.2 trillion infrastructure spending bill being pushed by President Joe Biden’s administration.

The timing is ripe for discussions about the Red Line with Maryland’s gubernatorial campaign in full swing. Hogan is term-limited, meaning he cannot run again for re-election. Democrats, who have a better than 2-1 voter registration advantage over Republicans in Maryland, are confident they will win back the governor’s mansion in next year’s election.