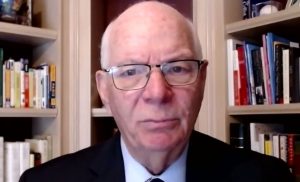 U.S. Sens. Ben Cardin and Chris Van Hollen have secured language in a $1 trillion infrastructure bill unveiled Aug. 1 that would expedite the Red Line light rail project in Baltimore if state and local leaders choose to restart it.

A bipartisan group of senators released the full text of the 2,702-page infrastructure bill after hammering out an agreement last week to move forward with one of President Joe Biden’s top priorities. The package includes $8 billion for the Capital Investment Grant program, the Federal Transit Administration program that had previously supported the Red Line before Gov. Larry Hogan killed the project in 2015.

Specifically, the bill includes language to ensure consideration of projects previously in the program, such as the Red Line. The $2.9 billion proposed light rail line would have provided east-west connectivity through Baltimore, spanning 14 miles from Woodlawn in the west to Bayview in the east.

Despite years of planning and having spent almost $300 million, the state pulled the plug on the Red Line after Hogan took office. By withdrawing from the project, Maryland forfeited $900 million in federal funding. The Republican governor’s decision has remained one of the top points of criticism of his administration by Baltimore Democrats, civil rights activists and transit advocates because the Red Line would have helped connect low-income, majority-Black neighborhoods to job centers.

The Hogan administration has described the Red Line as “fatally flawed” and cited the billion-dollar cost of building a single tunnel under downtown Baltimore, Harbor East and Fells Point as one of the main problems.

Cardin and Van Hollen, both Democrats who represent Maryland, said in a joint statement the Red Line has remained a priority for them since the Hogan administration killed it, and the inclusion of a provision in the infrastructure bill marks an important step in reviving the project.

Cardin last week said during a Greater Baltimore Committee event about infrastructure that he has spoken with Baltimore Mayor Brandon Scott about bringing back the Red Line. At the time, a spokesman for the mayor said Scott “shares Cardin’s eagerness” for reviving the project and improving transit in Baltimore.

Transit advocacy groups praised the inclusion of the provision in the federal legislation.

Donald C. Fry, President and CEO of the Greater Baltimore Committee, said the inclusion of the Red Line as a part of the bipartisan infrastructure bill “is a tremendous move forward in advancing transit in the Baltimore region.”

“The project as originally proposed was a significant economic opportunity and Baltimore has fallen behind with its removal from the current plans,” Fry said. “Having this language that potentially places the project back in the queue for funding is a positive sign.”