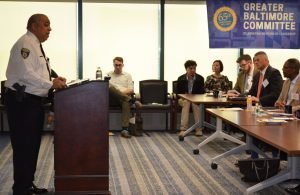 Every month, Baltimore Police Commissioner Michael Harrison takes a group of about 20 of his officers to the Center Club for a meal.

There, he takes questions on a range of topics for about 90 minutes. It’s an opportunity for the rank and file to hear directly from the commissioner instead of getting information through the media or the police union. Harrison also said meetings on the 15th floor of the Transamerica tower provide officers with a “different view of the city than they see every day.”

“Then I tell them, this feeling that you have on the 15th floor of this building, overlooking the city with this beautiful view and people serving you in tuxedos, is the level of excellence and service I expect from the department,” Harrison said.

A year into what some describe as “the toughest job in America,” Harrison faces pressure to bring down Baltimore’s stubbornly high murder rate. He spoke to dozens of business leaders about his efforts at a breakfast event hosted March 4  by the Greater Baltimore Committee.

Baltimore recorded 348 homicides in 2019, the fifth consecutive year the total topped 300. So far this year, the city has already counted more than 50 murders.

Harrison, who was chief of police in New Orleans before being appointed as Baltimore’s top cop last February by former mayor Catherine Pugh, said a five-year “crime reduction and departmental transformation plan” he implemented last year is working, despite the ongoing increase in homicides. He said other crime indexes such as robberies, auto theft and burglaries all decreased in 2019.

“I don’t have the luxury of only focusing on the one dynamic,” Harrison said. “I have to protect everybody from all crimes.”

At the Baltimore Police Department, Harrison is working to improve the organization’s culture and make it more digitally focused by utilizing new technology. One of Harrison’s first moves upon becoming commissioner was hiring more detectives in the homicide division.

With funding from the Abell Foundation, he was also able to send six members of the department to attend a leadership training program in Boston. Harrison wants to work with the business community on more professional development for his officers.

“I need help in figuring out how to change their thinking so that we run this 3,500-person organization much like you run your organizations,” Harrison said.

Harrison told business leaders he will soon unveil a new staffing plan for the department. He wants to get to 2,780 officers. Currently, he said the department is budgeted for 2,661 officers and has about 200 vacancies.

BPD unveiled a new recruiting campaign last year encouraging potential officers to “be a part of the greatest comeback story in America.” Harrison said the department has reduced its training time by eight weeks by making the process more efficient. It now takes four months to bring people onboard. Officer retention is also at its highest level in 20 years, Harrison said.

Scott Dorsey, CEO of Merritt Properties, said retention improvements show the department’s morale has improved and the culture is getting better.

“We are so focused on the level of violence that it’s hard to see where we are making incremental improvement, but I see it,” Dorsey said. “I think we are on the right track and going in the right direction.”

Harrison also talked about the controversial air surveillance program being implemented at the behest of Mayor Bernard C. “Jack” Young.

The $2.2 million program, funded by Texas philanthropists Laura and John Arnold, will allow a private company to fly planes recording images that can be used to help Baltimore police detectives investigate past murders, shootings and armed robberies. Harrison said the planes will begin flying April 1 — one month earlier than originally announced — and the program will be in effect for six months.

Dorsey and Greater Baltimore Committee CEO Donald C. Fry both said they remain confident in Harrison and are hopeful crime will decline under his leadership.

“He clearly has all the components that you need,” Fry said. “It’s not an easy job and it’s not going to be a one-year turnaround. We’ve got to have a plan out and implement it. We just have to give it time.”