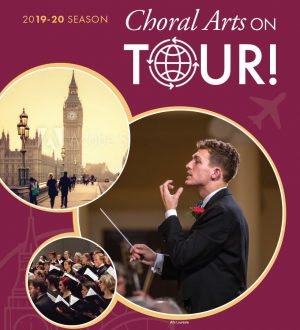 The Baltimore Choral Arts Society has brought music to the ears of Baltimore residents for 54 years, but the chorus anticipates that the 2019-20 season will be one of the most exciting yet. Leading into its appropriately named “On Tour” season, the arts organization has several announcements.

The Baltimore Choral Arts Society is taking approximately 60 performers to Europe to sing one of the world’s most famous and most difficult pieces, Gustav Mahler’s “Symphony of a Thousand.” The Baltimore Choral Arts Society is the only American chorus to be invited to sing at the City of Birmingham Symphony Orchestra’s 100th anniversary celebration, where they will sing Mahler’s piece with several other English choruses and orchestras in January.

“We are only the third American chorus ever to be invited to sing with the orchestra,” said Jack Fishman, Executive Director of the Baltimore Choral Arts Society. “This is a once in a generation chance to sing this repertoire.”

The group will be on tour in England from January 10-20, 2019. Tour stops include Oxford, as well as London where they will play at Saint Martin-in-the-Fields, before finishing up with the “Symphony of a Thousand” in Birmingham.  The tour is funded by the singers.

“We represent a little bit different part of the arts scene — being that we are mostly volunteers,” said Fishman. “[The volunteers] are paying for the tour themselves. It is a real endorsement of how strongly they believe in the community and the organization.”

The season’s theme, “On Tour,” doesn’t just apply to the European tour that the chorus will be taking. In addition, the Baltimore Choral Arts Society has moved its home concert venue to Shriver Hall Auditorium at Johns Hopkins University. They will be the first arts group in Baltimore to play at the newly renovated auditorium. Previously, the chorus would sing at Kraushaar Auditorium at Goucher College.