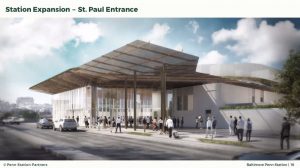 The development team working to revitalize the area around Penn Station in Baltimore is aiming to start construction late this spring on the first phase of the project, improvements to the 1911 train station itself.

Tim Pula of Beatty Development Group said in an online presentation March 18 that he anticipates work will begin with a series of exterior upgrades to the historic “headhouse” at 1500 North Charles Street. Work will include cleaning and repointing masonry, putting on a new roof, replacing or repairing windows and installing exterior lighting so the station stands out more at night.

The work is part of a $90 million commitment from Amtrak to upgrade Baltimore’s train station, the eighth busiest in the country. The exterior work will be followed in late 2021 by improvements to the station interior, including mechanical upgrades and tenant improvements, to get it ready to have more retail space on the first level and offices on three floors above, for a total investment by Amtrak of $50 million.

Other Amtrak-related improvements will include construction of a three-level, $40 million “north concourse” for passengers on the north side of the train tracks and a new, separately-funded rail platform for passengers riding on high-speed Acela trains that Amtrak will introduce soon, as well as a pedestrian bridge across the tracks from the 1911 terminal to get to it.

Redevelopment of the station and surrounding area is long overdue, Greater Baltimore Committee President and CEO Donald Fry said in introducing the panel.

“The plans for the Penn Station expansion and improvements are impressive and will transform an iconic Baltimore landmark into a modern-day regional transportation hub and gateway to the city,” Fry said. “Penn Station Partners and Amtrak are to be commended for their vision…This is something Baltimore’s been waiting for for a number of years, and I think they finally have the correct team to put this together.”