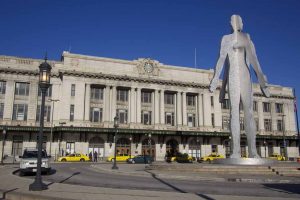 Will the renovation of Penn Station claim the Male/Female sculpture in front of Pennsylvania Station?

The question arose last week when Amtrak and its development partners shared their latest plans for a nearly-$500 million revitalization of the area around the historic train station, and the drawings didn’t show the 52-foot-tall sculpture by Jonathan Borofsky that’s been on the entrance plaza since 2004.

The forum was an hour-long briefing organized by the Greater Baltimore Committee. The subject was brought up by GBC President and CEO Donald Fry, who was relaying questions from the audience.

There’s “one question that is always a topic of discussion when we think about Penn Station,” Fry said. “What is the future in the overall plans for the Man/Woman statue that is in front of the building?”

It was the last question of the day after Amtrak and its partners had presented many other aspects of the revitalization plan, which includes modernizing the 1911 train station and building a new “north concourse” on the opposite side of the railroad tracks. One of the renderings showed the area in front of the station without Borofsky’s sculpture in place.

The sculpture was a gift to the city from the Municipal Art Society of Baltimore City, a private group founded in 1899. With a cost of $750,000, it’s one of the most expensive works of art ever donated to the city.