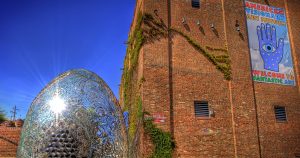 The following is an excerpt from the Baltimore Fishbowl article.

After 26 years as founder, director and primary curator of the American Visionary Art Museum in Baltimore, Rebecca Alban Hoffberger is bidding adieu.

Hoffberger, who co-founded the museum with her former husband, the late LeRoy Hoffberger, and built it into one of Baltimore’s most beloved attractions, has told her board of directors that she plans to retire in March of 2022.

The board has appointed m/Oppenheim Executive Search, a national firm that frequently works with museums, to launch an international search for her successor.

“After 41 total exhibitions, but 26 thematic ones, I’m passing the baton,” Hoffberger said. “The idea for the museum came to me in 1984, when I was working at Sinai Hospital for People Encouraging People, so it has occupied more than half my life…I think now is the right time.”

Hoffberger, who will turn 70 in 2022, said she intended to step down at the end of 2020 – AVAM’s 25th anniversary — but agreed to stay longer to help see the museum through the worst of the COVID-19 pandemic.

When America went into lockdown, “it was no time to try to bring in a new person,” she said. “No one knew how long the mandatory shutdown would be in effect or the impact that would have financially. The last thing to do, in an uncertain time, would have been to bring in somebody brand new, who couldn’t even be face-to-face with the employees. So I stayed on, and I’m glad I did.”

Her final curated exhibit as director will be “Healing & The Art of Compassion (And the Lack Thereof!),” scheduled for October 9, 2021, to September 4, 2022. It will focus on the twin forces for creating “greater good” in society, healing and compassion.

On November 20, the museum will host a “Farewell Fundraising Gala in Honor of Rebecca Alban Hoffberger.” On April 3, 2022, it will have a “Fan and Member Grassroots Celebration,” including a lecture by Hoffberger.

For now, Hoffberger says, there’s much she still wants to accomplish. She hopes to get a grant to restore Vollis Simpson’s Whirligig, exposed to the elements for the last 26 years. She wants to add a service elevator to the south side of the Jim Rouse Visionary Center, so caterers bringing in food are separate from VIP guests arriving for a banquet. She wants to make two top-level restrooms unisex.  She wants to increase the museum’s endowment, finish a virtual book of quotes from all the exhibits, and make sure the next two major shows are coming together. She’s narrating a retrospective of the museum’s history.

“I’m trying to get as much done as possible,” she said.