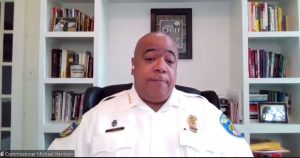 On May 26, 2021, the Greater Baltimore Committee (GBC) hosted a conversation with Baltimore Police Commissioner Michael Harrison and GBC President and CEO Donald C. Fry on how the Baltimore Police Department and other law enforcement agencies across the country are addressing the calls for major police reform.

Commissioner Harrison, who was appointed to the U.S. Conference of Mayors’ Police Reform and Racial Justice Working Group, recently appeared on Meet the Press to discuss the issue of police reform in America.

In his introduction, Fry said, “Commissioner Harrison is one of the most respected public safety leaders in our country. [He] has been instrumental in the development, implementation and assessment of community policing programs.”

The conversation addressed such topics as:

Key takeaways from the discussion

“Many of the suggestions that we made came from Baltimore’s consent decree,” said Harrison. “We have the most progressive and comprehensive and expansive consent decree in all of America. The Baltimore consent decree is a complete makeover of a police department. It covers everything from recruitment hiring to training to policy to technology to supervision.”

The report took about four months to complete and the workgroup’s recommendations were sent to every mayor in the country. It covered topics such as “sanctity of life,” “duty to intervene,” choke holds, shooting at moving vehicles, pursuit on foot, etc., said Harrison.

“I was extremely proud to be part of that working group,” Harrison said.

The most significant recommendation in the report:

“The most important is trust and legitimacy,” said Harrison. “You have to first create the appropriate policies and we don’t really have trust and legitimacy because police departments for too long have created their policies out of their own silos without community input.”

What defunding the police really means:

“It’s a phrase that has a lot of different meanings to different people,” said Fry.

“Defunding really means redefining and moving resources to really where it should be,” said Harrison. “So people who should be answering certain types of calls — like calls for mental illness or homelessness — over decades we’ve just been responding to everything in the absence of all the other disciplines that should be responding.”

Now, some funds traditionally allocated to police departments are being moved to other disciplines that are better suited to deal with mental and public health issues.

How difficult is it to work with the consent decree?

“We certainly believe it is valuable and many departments have used it in a responsible way,” said Harrison. “I certainly understand that concept of the negative things that go along with it like false negatives, false positives. Especially when it comes to people that have darker skin complexion.”

Harrison noted there are ways to protect against abuses or misuses of facial recognition and suggested that not having the software may put the Baltimore Police Department behind the curve with investigations.

Fry noted that State’s Attorney Mosby recently announced that she will not prosecute some crimes such as drug possession, prostitution and trespassing and asked the commissioner how that will affect the police department.

“The two major complaints are open-air drug dealing and prostitution,” said Harrison. “We’re still responding to those complaints. The issue is we’re enforcing against drug trafficking — anybody selling drugs, dealing drugs. Hopefully, we can get people to the services they need if they’re an addict or if they’re participating in sex work.”

Recruitment challenges due to the public’s negative perception of police officers:

“The interest is still there and we’re seeing people from Baltimore City and all over the region — more females, more minorities,” Harrison said.

“I wish we had the number of personnel that we actually need to be able to create the appropriate community engagement policing plan that is required,” Harrison said later when Fry asked him what’s at the top of his wish list.

“Now that we have permanent solid leadership in both the police department and the mayor’s office, we are moving forward with our group violence reduction strategy, which really deals with enforcement for those who are committing violent acts and helping them have a pathway away from violence,” said Harrison.

He noted the goal is to help those offenders who want help and stop those who don’t.

“We’re starting a new gun intelligence unit to help trace where these guns are coming from and to try to track down who are the individuals bringing all these guns into our city,” he added.

Harrison also noted that some of the recent spike in homicides is coming from domestic violence and intimate partner murders, as opposed to gang and group violence.

Changing the culture of gun violence:

The continued debate about the squeegee kids:

Harrison noted that offering squeegee services on the street is similar to panhandling, which is unconstitutional to enforce against.

“We’re working with our mayor’s office. There are individuals out there, engaging with those kids. We’re not arresting them for the simple act of squeegeeing. However, we’re engaging with them to find them opportunities for both education and employment,” said Harrison.

He also said that some of the kids tell the officers they can make more money on the street than in a job. But he did note that officers take enforcement action when the youths commit crimes against people or property.

Toward the end of the discussion, Fry asked about continued reports of police brutality across the country. “It doesn’t seem that some officers have gotten the message that such conduct is not only unacceptable but, in many cases, is in fact criminal. What’s it going to take to ensure that police contact or enforcement matches up with what the public accepts as proper?”

Harrison replied: “I think it’s going to take a lot of policy changes and policy changes should translate into training changes. …When officers are engaged and get that tunnel vision because they’re focused on whatever is happening in front of them, they will revert back to the training or whatever the muscle memory is.”

Policing in the technological evolution:

Fry asked Harrison about advice for officers in the age of cell phones and other devices and now that everyone’s always on camera.

“Move away from the warrior mentality to the guardian mentality and accept the ideals of what protect and serve really means,” Harrison said. “What can you do to create a culture of peace that prevents these bad things from happening and, when they happen, how are you handling them? Is your department training people to respond appropriately?”

Harrison said when the city is able to change the culture of surviving by living a life of violent crime and when the police department undergoes reform, “We’ll see the city really turning the tables and you’ll see the numbers go down. But, it requires both of those things being done at the same time. I certainly see that in our future.”