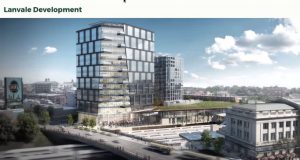 Amtrak and developers are pushing ahead with a multi-million dollar transformation of Baltimore’s historic Penn Station into a mixed-use, high-speed rail hub with the potential to spark large-scale investment in nearby neighborhoods in coming years.

Work is expected to start later this spring, representatives of Amtrak and the development team said March 18 during a virtual presentation organized by the Greater Baltimore Committee.

Improvements to the station are long overdue, said Donald C. Fry, the GBC’s president and CEO.

“The plans … are impressive and will transform a iconic Baltimore landmark into a modern-day regional transportation hub and gateway to the city,” Fry said.

The station, a central stop along the Northeast Corridor serving 3 million passengers a year, is the 8th busiest in the U.S. for Amtrak, which is investing $90 million in improvements.

Those include refurbishing the more than century-old “Head House,” the station building on North Charles Street, building a new high-speed rail platform to the north of the tracks and constructing a modern, glass-walled passenger concourse above that platform. Space will be renovated or added throughout for shops, eateries and offices.

Amtrak is reviewing bids for construction of the high-speed rail platform.

For the rest of the station overhaul and expansion, Amtrak entered into a master development partnership in 2019 for those projects with a team that includes Baltimore-based firms Cross Street Partners and Beatty Development.