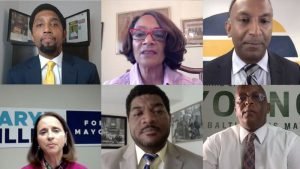 The recent spate of crime in Baltimore — nine people were killed over Memorial Day weekend and a police officer was shot overnight — loomed large over a mayoral debate Wednesday, May 27.

In a forum hosted by the Greater Baltimore Committee and WBAL-AM, the six leading Democratic candidates either sought to distance themselves from the violent status quo or pointed to work they’ve done while in office to address the problem.

Candidates threw more punches May 27 than they did in an earlier televised debate, seeking to make their final pitches to a divided electorate in which many voters remain undecided.

Citizens should have already received their ballots for the June 2 primary, which was shifted to a mostly mail-in election because of safety concerns tied to the coronavirus pandemic.

It’s expected to be a close race: A poll by The Baltimore Sun, the University of Baltimore and WYPR-FM showed former Mayor Sheila Dixon and former T. Rowe Price executive Mary Miller tied with 18% support. They were followed closely by City Council President Brandon Scott at 15% to put the three candidates in the lead at the time pollsters surveyed voters in mid-May.

The poll also found that 60% of Baltimore voters believe stopping violent crime should be the next mayor’s most urgent concern, even as the COVID-19 death toll and unemployment rise.

The city has seen more than 300 homicides annually for five consecutive years.

Young defended his plan for reducing crime and repeated a frequent retort: “Everything these candidates are talking about — I’m already doing it.”

The debate was held May 27 via video conference call. WBAL-AM will air it May 27 at 7 p.m.

Above photo: Screenshots of candidates in a Baltimore mayoral debate May 27 hosted by the Greater Baltimore Committee and WBAL-AM.(Kevin Richardson / Baltimore Sun)