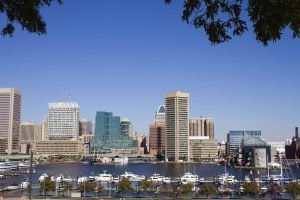 By Baltimore Sun Editorial Board
March 23, 2021

The toll the pandemic has taken on Baltimore’s business environment is mighty. You can see it in barren downtown streets as companies have turned to remote work or laid off employees. Fewer workers also means fewer lunchtime diners and shoppers to patronize struggling restaurants and retailers. Consumers are also shopping more from their computers, which also limits local sales, along with capacity restrictions. The tourism industry has come to a near halt, too, as people pull back on travel plans.

Compound this with non-COVID related problems the city already faced — namely crime, a neglected Harborplace development and businesses planning relocations like a game of musical chairs — and the hurdles are many as Baltimore begins to rebuild its economy. T. Rowe Price’s eventual move to the Harbor Point development to the east will leave a hulking void downtown. Pandora and Bank of America are also considering leaving downtown, and the fate of Transamerica Corp. is uncertain, the Baltimore Business Journal has reported. The city needs a strong strategy to ensure it is able to develop a thriving business environment. A new deputy mayor for community and economic development will have a lot on his plate when he comes on board next month. We hope he is ready to jump in right away.

There are already some good ideas swirling around that the city should consider. Local business groups, including the Downtown Partnership, Greater Baltimore Committee and Baltimore Development Corporation, have been studying the challenges — and offering solutions for them. Brandon Scott’s transition team also included a task force focused on economic development and business in the city.

The downtown area has been the hardest hit during the pandemic and should be one of the first priorities. Some common themes for improvement that have come out include safety, a persistent issue in Baltimore, and transitioning the downtown to a place that is not dominated by large companies. That could mean offering city incentives to allow landlords to reconfigure their buildings to attract small and mid-size businesses, as suggested by the GBC, and eliminating some of the government bureaucracy to speed up the permitting and design process. The Downtown Partnership also has put an emphasis on attracting small and minority and women-owned companies, and early results from a survey of businesses found that people also want better looking gateways into downtown.

The city could start with one of the most prominent hubs, Harborplace, which remains in court receivership, where it has been since 2019 ever since a subsidy of Ashkenazy Acquisition Corp. defaulted on its mortgage. The sprawling, but neglected, shopping complex at the Inner Harbor, technically just outside the downtown neighborhood, needs a makeover, and the city needs to be more proactive to ensure that it happens. City officials need to put more pressure on the courts and the developer and look at outside the box strategies to recreate the once vibrant area. City officials have been too quiet on the issue, which can leave the impression of not caring. The GBC, which was integral to the original development of the Inner Harbor, has suggested eminent domain as a possible solution. We think the possibility of the city taking over the property and finding new developers is an idea worth exploring.