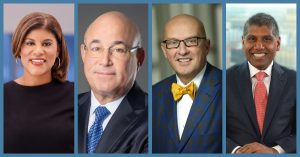 Doses of the highly anticipated coronavirus vaccine could start arriving in Maryland as soon as next week, with the first shots reserved for hospital workers and nursing home residents and employees, state officials said Dec. 8.

The state’s vaccination planning efforts have accelerated as multiple vaccine candidates near approval and as the infection rate and death toll from the pandemic climb. Distribution of 50,700 doses of a Pfizer vaccine could begin as soon as Monday, with 104,300 doses of a Moderna vaccine arriving a week later, Maryland health department officials said during a State House news conference.

The initial batch of vaccines will be enough to give just the first of two shots to about 155,000 people — just a tiny portion of what’s needed to eventually inoculate 6 million Marylanders, and not enough to cover the highest-priority groups. The second shot is required weeks later to achieve full efficacy, which is more than 94% for both the Pfizer and Moderna products.

The state expects to receive 300,000 doses by the end of the month, Republican Gov. Larry Hogan said Dec. 8 at a news conference.

It may be months before the general public will be able to get the vaccine, as the state works through a list of priority groups, starting with health care workers and nursing home residents, followed by those at highest risk of complications and death, essential workers, people at moderate risk of severe illness and, finally, those without risk factors.

Maryland has 227 nursing homes and 1,668 assisted-living facilities. The state has signed them up for a federal distribution partnership through CVS and Walgreens.

Eventually the vaccine will be available to the general public at pharmacies and doctor’s offices, said Bryan Mroz, a nurse who is the chief medical officer and assistant secretary for the state health department.

The prioritization of different groups was done following federal guidelines, and also in hopes that by vaccinating those at highest risk of complications first, hospitals would be able to maintain enough room to treat all those who fall ill.

Asked if the vaccine could be made mandatory for schoolchildren, like vaccines for childhood diseases, Hogan said: “We don’t have any intention of requiring these vaccines, but we’re going to do everything we can to encourage.”

Maryland’s medical community will focus on vaccinating a diverse range of residents, including those disproportionately impacted by the pandemic, said Dr. Mohan Suntha, president and CEO of the University of Maryland Medical System, during a virtual seminar the Greater Baltimore Committee hosted Dec. 8.

Though the public health crisis has exacerbated existing health care inequities along lines of race, ethnicity and class, Suntha said, widespread vaccination would be a first step toward remedying disparities.

“We should consider it a failure if those with the greatest risk are the least vaccinated,” said Suntha, adding that faith leaders, nonprofit groups and the business sector will have to join the messaging campaign.

Part of the challenge of mass vaccination will be overcoming the politicization of the science, said Kevin Sowers, president of Johns Hopkins Health System and another panelist at the GBC event. He said he expects Hopkins to receive about 975 of the first available doses, which will be distributed among the health network’s 35,000 employees based on their vulnerability to the virus, as well as their exposure levels.

Some people will need convincing that they aren’t “guinea pigs” in a global experiment, Sowers said.

“There’s a lot we’ll have to do on the community level,” he said. “It can’t just be our voice.”

To read the complete article, visit the Baltimore Sun website.