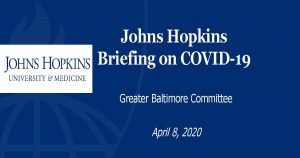 As cases mount, the state’s hospitals are also preparing to handle more patients. An additional 104 hospitalizations because of the coronavirus were announced April 8 an uptick of nearly 10%. While 1,210 Marylanders in all have been hospitalized, 365 have been released from isolation.

Bob Atlas, CEO of the Maryland Hospital Association, said the 26.5% jump in confirmed cases in the last 24 hours is “concerning” but hospitals remain able to handle the cases.

He said the University of Maryland Medical System, MedStar Health, LifeBridge Health and Johns Hopkins Medicine are all coordinating patients within their systems, as well as with state health and emergency management officials. That will help keep hospitals, including those closer to Washington, from becoming overloaded.

However, hospitals across the state are ramping up capacity within their walls and inside about 100 specialized tents that are on their way to the state. They are separate from triage tents that are serving people who arrive at the hospitals for care. There also are two new hospital facilities in the works to accommodate hundreds of patients, one inside the Baltimore Convention Center and another at a shuttered hospital in Laurel.

During a Zoom presentation to members of the Greater Baltimore Committee on April 8, the president of the Johns Hopkins Health System said Hopkins has confirmed 1,048 cases of COVID-19 since the beginning of the pandemic, with 186 patients in the hospital system as of that morning.

Of those, 20% percent are on ventilators, which Kevin Sowers called a typical statistic in the U.S. and elsewhere.

But “we have not met our surge,” he told the business organization.

As the hospital attempts to create surge capacity and support social distancing, outpatient visits are down by 60%, Sowers said, with strict visitation policies put in place. Telemedicine visits have ballooned from eight patients a day to more than 1,200.

“Out of something really horrific that is happening in our world, this will also force us to look at ways that we can change and become better at delivering health care services to our communities” in the future, Sowers said.