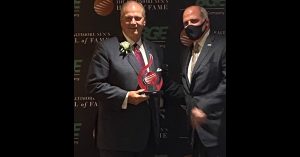 The Baltimore Sun has named five GBC Board members and two organizational leaders to its 2021 Business and Civic Hall of Fame, which recognizes leaders in the Baltimore region for transformational efforts to improve the community.

GBC Board members named to the Hall of Fame are:

Additionally Donald C. Fry, President and CEO of the Greater Baltimore Committee, was selected to the 2021 class. Fry’s predecessor Don Hutchinson, who served as GBC President from 1993 to 2002, was also included on the list.

The Baltimore Sun wrote of Fry: “A former state legislator, Mr. Fry has served as president and CEO of the Greater Baltimore Committee for nearly 20 years, advocating for businesses throughout the region, while seeking to address the area’s social and civic challenges. He has given his time to myriad boards, including those of United Way of Central Maryland, Hire One Youth and CollegeBound Foundation.”

The awards were presented at an awards banquet on September 9, 2021, at The Center Club.

See the complete list of winners and read the article here.