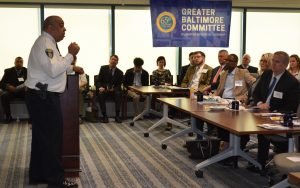 Speaking with the Greater Baltimore Committee, Harrison said he would like to see more resources directed toward helping teenagers and young adults get good jobs and a better education. He also touted his five-year crime-fighting strategy meant to reduce violence and increase community engagement while complying with reforms required under a federal consent decree.

While Harrison’s talk touched on a number of topics related to his already released crime plan, here are some highlights from the approximately hour-long discussion:

Squeegeeing is not a crime

While the teenagers and adults cleaning car windows at city intersections represent a public safety issue, Harrison said they are not committing a crime.

“When they step out of line and are committing harm and damage to people’s cars and are attacking people, those are crimes that we absolutely are enforcing,” he said, adding that stationing officers at known intersections means taking officers away from addressing more serious crime.

Harrison dodged a question about a bill in the General Assembly that would allow the governor to declare a state of emergency in Baltimore due to the murder rate. The bill would allow Gov. Hogan to declare a state of emergency in any municipality or county that has a homicide rate of three per 100,000 residents in a month or higher, a threshold Baltimore already meets.

To read the full story, visit The Baltimore Sun’s website.