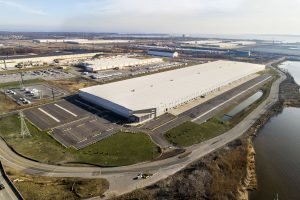 A Tradepoint Atlantic executive said he’s confident about the distribution hub’s ability to operate safely — and continue to expand — amid the coronavirus outbreak.

But the virus isn’t slowing down Tradepoint’s expanding development goals, Tomarchio said. He expects coronavirus impact to supply chains may even “lead to further investments in the industrial market space to allow companies to get closer to their customers.”

The Sparrows Point redevelopment has created 8,000 jobs, and Tomarchio said the company thinks it’ll exceed its goal of providing 10,000 jobs for residents in Baltimore County and surrounding jurisdictions. Amazon, for instance, is slated to open a second distribution center on site during this year’s holiday season.

Tradepoint Atlantic is a 3,300-acre logistics center located on a peninsula in southeastern Baltimore County that housed the former steel mill, which closed in 2012. Tradepoint has built 8 million square feet of facilities for distribution, warehousing and industrial needs, but Tomarchio said they’re currently planning for an additional 7 to 8 million square feet of future development.

More than 20 companies are currently tenants at Tradepoint, including Royal Farms, which is slated to open a convenience store on site on Friday. Distribution hubs for Floor Decor and Home Depot have recently started operations as well, Tomarchio said.

The Royal Farms store will be located in what Tradepoint envisions as the “retail sector” serving 10,000 on-site employees and the surrounding communities, Tomarchio said. He shared renderings of a retail and mixed use development plan called “The Shoppes at Tradepoint Atlantic” that would be formed along the frontage of Bethlehem Boulevard and Interstate 695 going forward.

Donald C. Fry, president and CEO of the Greater Baltimore Committee, pressed for information about the challenges ahead for Tradepoint, and Tomarchio said public transportation access to the site continues to be “one of our core challenges.” Tomarchio thanked the Maryland Transit Administration for rolling out a bus route in 2018, but he stressed “there’s more we can do to help better connect everybody throughout the region.”

Fry said Tradepoint appears to be in a good position for growth due to its access to deepwater berths, rails, and highways. He agreed with Tomarchio’s assertion the region will continue to attract businesses for supply chain management thanks in part to Tradepoint, the Port of Baltimore, and their proximity to East Coast markets.

“I think Tradepoint Atlantic is going to prove to be a major economic and employment hub for the Baltimore region as a whole, and I think it is exciting to see a transformation from what was a heavy industrial site to a modern day global logistics center,” Fry said.

To read the complete article, visit The Baltimore Sun website.