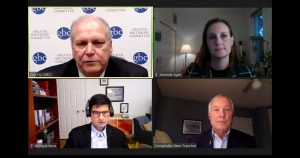 Uncertainty about the ongoing coronavirus pandemic and the upcoming presidential election could dampen the economy in Maryland and elsewhere for months to come, experts said Oct. 27 during an economic outlook conference in Baltimore.

“The pandemic and its economic consequences, in my view, are not going to be under control until the end of next calendar year,” state Comptroller Peter Franchot said during the Greater Baltimore Committee’s event, held virtually this year. “It’s going to be a tough winter, make no mistake, and a stormy 18 months.”

The state’s economy is likely to sputter amid potential delays in next week’s election results, questions over whether Congress will approve a much-needed new round of coronavirus aid and the timing of a COVID-19 vaccine, Franchot said.

Help for small businesses is especially crucial, said the comptroller, who launched a campaign Oct. 26 urging consumers to shop local stores and restaurants for the holidays.

He said tens of thousands of the state’s small businesses are barely hanging on or already have gone out of business, and more than one million people have filed for unemployment at some point.

Franchot criticized Gov. Larry Hogan’s recent plan to offer $250 million more in aid for struggling businesses as falling short. The governor said Thursday he would tap funds from the state’s Rainy Day Fund, including $100 million for an “emergency rapid response fund” for small businesses in hard-hit areas or industries.

Franchot called that program “haphazard” and implored the governor to “send me in the comptroller’s office within two to three days… a list of 30,000 small businesses in Maryland on the brink of closing. I will put money in their bank accounts within 48 hours. That’s what we need to stabilize the small business economy in Maryland.”

While economies and financial markets have weathered pandemics in the past, never before has a global economy been shut down, said Amanda E. Agati, a senior vice president and chief investment strategist with PNC Financial Services Group.

“It’s easy to flip the switch off and much tougher to flip that switch back on,” Agati said.

Some indications of a slow recovery include weak so called same-store sales at brick-and-mortar retailers and steep drops in public transit ridership, airline bookings and restaurant reservations.

“None are anywhere near pre-COVID or February levels,” she said. “It’s important in gauging the health or lack thereof of the consumer. … Main Street is clearly not out of the woods now. The key to the path forward is the health and psyche of the consumer.”

In the past, forecasters have turned to stock market performance as a predictor of presidential election results. If the S&P 500 is up three months before an election, as it has been, the party in power tends to stay in power.

“Will this be [only] the fourth time that the market gets it wrong, or will the market be an accurate predictor?” Agati said. “This year in particular … the wild card for the election is absolutely going to be voter turnout.”

While the stock market might point to the re-election of President Donald Trump, other economic indicators, including disposable income and monthly payrolls, point to former Vice President Joe Biden.

“Based on this data at face value, it would certainly suggest a change in control,” Agati said. “The key question is will voters hold Trump and the administration responsible for all this economic damage or will they blame COVID?”

Any delay or drama in returning election results will impact the stock market, said Bernard Yaros, assistant director and economist for Moody’s Analytics.

A year ago, Moody’s projected a Trump win, expecting an ever greater margin than in 2016 because of strong economic fundamentals, Yaros told the conference.

The president “was on a glide path onto re-election, until COVID-19 came and knocked him off that steady path,” Yaros said. “However because of the unemployment crisis that we have and all the upheaval that we’ve seen because of COVID-19, the forecast has swung dramatically in favor of Joe Biden, though … we’re still not projecting a Biden blowout.”

Whoever wins, Agati said, “the single most critical determinate of the [economic] path forward is COVID itself … because it is still lingering, because it is getting worse here, that that will govern the path forward.”

To read the complete story, visit The Baltimore Sun website.