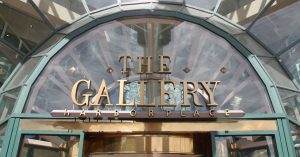 Sibgha “Saba” Altaf said customers used to come from all over Maryland as well as Pennsylvania and New Jersey for her to do their eyebrows at The Gallery at Harborplace mall in downtown Baltimore.

But foot traffic at the Inner Harbor mall slowed considerably when the food court closed in 2015, said Altaf, the owner and sole employee of Organic Eye Brow Threading. It dwindled even more once the COVID-19 pandemic sent many workers home for more than a year.

In what would be the latest loss for Baltimore’s brick-and-mortar retailers and its once-bustling downtown, Altaf said she and the other retail tenants at the Gallery have been told they must vacate the Baltimore mall at the end of the year as the owner reconsiders its plans for the building.

Brookfield Properties, the mall owner, declined to answer questions about its plans for the multi-level retail portion of the 30-story building at Pratt and Calvert streets. It also includes 265,000 square feet of office space, the 680-room Renaissance Hotel and a five-level underground parking garage.

“We are currently evaluating several potential options to reposition the Gallery that will meet the needs of the market,” said Brookfield spokeswoman Laura Montross in an email. “We will keep you informed on updates as we are able.”

Mayor Brandon Scott promised to collaborate with the mall owner on major upgrades to the building, which once served as one of downtown’s attractions alongside Harborplace and the National Aquarium nearby.

“The City will continue to work with Brookfield as they consider options for significant improvements and investment in the Gallery to meet the needs of the market,” said Stefanie Mavronis, a spokeswoman for the Democratic mayor.

The Greater Baltimore Committee, a regional business advocacy group, is among the tenants in the building’s upstairs offices. GBC President Don Fry said he has noticed improvements in the office areas of the building, including an ongoing renovation of the lobby and a common gathering area upstairs.

“I’ve seen significant activity of people, potential tenants going through the building and meeting with people, so there seems to be a lot of activity and interest still in this complex,” Fry said.

While Fry said he didn’t have any details on Brookfield’s plans, he noted the devastating effects of the pandemic and e-commerce on retailers large and small.

“It’s not uncommon that we see companies that own large retail establishments like The Gallery, are looking to determine what adjustments, if any, are needed to address the current demand,” he said. “We’ve seen offices close or people working from home. We’ve seen hotel occupancy low, so foot traffic has been considerably less. And of course with people adjusting and shifting to online shopping, that certainly impacts the retail operations at any location.”

The financial woes of the nearby Harborplace, which has been in court-appointed receivership since 2019, when its New York-based owner defaulted on its loan for the property, “haven’t helped,” Fry said.

“The Gallery has been largely seen as an extension of Harborplace, and Harborplace has certainly struggled,” he said. “But I’m still optimistic that this is a prime location.”