The mayors discussed their experiences and lessons learned while holding Baltimore’s top elected office and addressed such topics as running an urban city of more than 600,000 residents; expectations, challenges and surprises resulting from being Baltimore’s CEO; and reflections on current challenges facing big city mayors and how it differs from their tenure in office.

See some highlights and excerpts from the conversation here.

On first impressions upon assuming the role of Mayor of Baltimore City:

Kurt Schmoke: “I was amazed by the amount of people who wanted to speak and hear from the mayor. You have to be out there. People have to see you.”

Martin O’Malley: “The thing that struck me was the breadth and the scope of the operations. …I was now responsible not just for criticizing but for running.”

Sheila Dixon: “Mayor [Clarence] DuBurns said, ‘Whatever you do, as a City Council person, learn city government. Learn the agencies. Learn the budget. Learn the processes.’ I had a really good handle on the direction and what I wanted to move the city forward with.”

Stephanie Rawlings-Blake: “I did not have the benefit of a smooth transition. It was a very trying time for the city. I got sworn in [on the same day that] an officer got shot … and the next day was Snowmageddon. It was a challenge, but it was also a blessing. …Snowmageddon gave me a really good opportunity to hit the ground running.”

On some of the biggest surprises of the job:

O’Malley: “I would echo Mayor Schmoke on the numbers of people who just want five minutes of your time and it’s never just five minutes. It’s always a half hour. …Big surprises were really those of a personnel nature in my first year. …Time is short when you’re mayor. I always had this internal clock ticking in my head realizing that my opportunity to do good for the city was very limited. I just didn’t want to waste it.”

Schmoke: “The one thing we all found is there was more will than wallet. There were things we wanted to do, but we were constrained on resources. That’s the biggest challenge that Baltimore continues to face.” 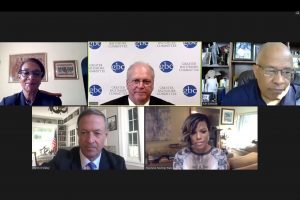 On the three qualities a mayor needs to have a successful tenure:

Schmoke: “I learned something fairly early on: I can win elections without the business community, but I can’t govern without the business community. I think that’s truer now than when I was Mayor. Learning to work well with business leaders is vitally important because you need a great economy and most of the problems in the city could be solved by having living wage jobs. If you don’t have a good economy, it can ripple through everything else you are trying to do.”

O’Malley: “Without public safety, it’s really hard to make progress on other things — whether it’s housing, whether it’s jobs, whether it’s any sort of quality of life. We are uniquely bad right now in terms of the amount of violence that we allow on our streets and almost all of the victims are young and poor and black and male. One of the most important qualities for mayor is to say, that is not alright, that is not OK.”

On challenges they faced during their tenure vs. challenges of today:

Rawlings-Blake: “The pandemic has changed everything. The environment is new. The challenges are still unraveling as we are trying to see the best way to reopen our society in a way that is safe. I know how challenging it was to run a city with ‘more will than wallet.’ …It cannot be overstated how challenging it is to govern in these times. The pre-existing problems of a city don’t go away because you need to focus on the pandemic. Those problems still exist.”

Dixon: “I governed under recession, but this recession is going to be even worse. It’s going to be really important who we have in the White House. …We have to get a handle on the crime in the city. We have to make it a priority. …The next mayor needs to work in partnership with the private sector and our federal and state government.”

Schmoke: “The fact remains we’ve only had two or three times in the last 50 years that we’ve had fewer than 200 murders in our city a year. We’ve almost gotten used to having that number. We have to break that and not tolerate it. …The time has come for the whole community to commit to working together to lower this homicide number. We are now viewed internationally as one of the most violent cities in the world. We can’t tolerate that. That has to be a priority. Bottom line: Deal with crime and grime. Make it safe. Make it clean. If we could commit to getting that homicide number way under 200, that would make a huge difference for our city going forward.”

On regionalism and making Maryland understand it has a stake in Baltimore’s success:

O’Malley: “We are one Maryland. As Baltimore does better, all of us do better. This is the economic engine of our state. …It was a damn shame, to put it mildly, that Governor Hogan would…kill that Red Line. I do think the time will come when we’re able to connect East and West Baltimore together with something like the Red Line or a Circulator.”

Rawlings-Blake: “If you want the region or the state to partner with you, you have to be a good steward of the resources that are shared. …You would hear people say investing in Baltimore is like putting water in a bucket with a hole in it. That really pained me. Being a good steward is crucial. Any relationship is a two-way street.”

Dixon: “Working with the region is crucial and we are all experiencing some of the same challenges. What things can help to strengthen all of us? …We have to look at those issues that we can agree upon that cross over the line.”

Schmoke: “Our counterparts in any county, their voters are simply going to say, ‘What’s in it for us? How does it benefit us?’ Things like transportation. You know there’s a real benefit. Public safety, also. Start working together on those and that’s how you build regional cooperation. Show specific issues that actually affect the county voters.”

On changes to the Board of Estimates and the prospect of adding a City Administrator:

O’Malley: “I would not be in favor of either of those proposals. We should not lightly throw out the strong mayor system we have. I believe it’s superior to others provided the mayor does the job. …Having a strong mayor is important. Hopefully, the next mayor will also be a good one.”

Schmoke: “You have to choose great people. I would urge the next mayor to focus on that before they start playing around with changing the budget process, changing the Board of Estimates.”

Rawlings-Blake: “I think it’s very short-sighted. We’re in a fight for our lives in the recession and our response to the pandemic. It does not make sense to be in a fight for your life and not be able to be at full-strength.”

Dixon: “This will destroy many issues and priorities that need to be put in place. Reducing the Board of Estimates will make business in the city, as well as city government, function a lot slower because it then becomes very political. Making those changes would be very detrimental to the city.”

Responding to an audience question about what to say to Baltimoreans who have stopped believing in the city, O’Malley responded, “Baltimore needs to help herself. We have an egalitarian can-do attitude, but we allow ourselves to tolerate a very high level of very violent crime. We have to break out of that. …We are not doing for ourselves. We’re accepting a high level of violence and carnage as long as the young men that we bury are poor and black and it’s outrageous.”

On one piece of advice for the incoming Mayor:

Rawlings-Blake: “Reach out to all of us. Each one of us served our city because we want the best for the city.”

Dixon: “We are all still committed to Baltimore. We have different talents and thoughts and ideas that could be a great asset.”

O’Malley: “Surround yourself with the best people you can find.”

Schmoke: “Be optimistic. Talk to us from time-to-time.”

In closing, Fry told the former mayors, “We are very appreciative of your service to the citizens of Baltimore City, as well as the State of Maryland. The work that you did, your experiences, your sage advice and insights are something that can be very valuable to Baltimore’s next mayor. We certainly hope you are consulted moving forward.”