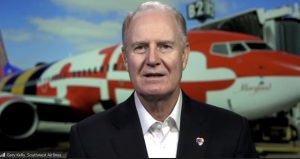 This year has been a bleak one for airlines across the U.S.

Passenger traffic is down to fractions of what it was a year ago as the novel coronavirus continues to disrupt travel and business as usual. Major airlines like United and American have furloughed tens of thousands of their employees. And there’s not much relief in the near term, with experts projecting that a return to pre-Covid levels won’t happen until 2024.

Yet Baltimore/Washington International Thurgood Marshall Airport’s dominant carrier is planning new routes for 2021. In recent months, Southwest Airlines has announced it will launch service next year from Baltimore to new destinations including Sarasota, Florida, and Savannah, Georgia. The airline began nonstop flights between Baltimore and Miami International Airport on Nov. 15.

The strategy may seem counterintuitive, but Southwest CEO Gary Kelly says it will actually help the airline to pull in hundreds of millions more dollars next year.

“We’ve run this play before,” he told local business leaders during a Nov.2o virtual discussion hosted by the Greater Baltimore Committee.

The main challenge for Southwest, a company with a high fixed cost of business, is the decline in passengers prompted by Covid-19. With traffic down 60% to 70%, income has taken a hit, but the company has only managed to cut its operating costs by about half.

For a route like Baltimore to Chicago, where traffic is down 70%, “there’s nothing we can do right now to stimulate that traffic,” he said. “So you sit there and you’re stuck.”

Adding new dots to the route map, however, expands the potential for growing traffic.

“We will actually be able to get new passengers,” Kelly said. “Maybe we’ll take some of our existing customers that fly on us and they will say ‘oh, now I can fly on my favorite airline to a new destination,’ so it will be a new trip for us.”

“You might say that sounds like that’s a lot of investment to add a new route, but the scenario is we have 150 airplanes sitting on the ground right now doing nothing, paying for them everyday. We’ve got 20% more employees than we need right now because we have not furloughed anyone and I don’t want to furlough anyone. So anything that we can do to take those fixed costs that are now idled and put them to work, the hurdle rate to actually contribute cash is very small.”

Southwest is one of the only major airlines that has not yet furloughed any workers due to the pandemic, though the company filed notice earlier this month that furloughs could be coming in January if its employee unions don’t agree to a 10% pay cut proposed by the airline’s leadership. The furloughs could affect 106 Southwest employees based out of BWI.

Kelly said Southwest’s broad network with dozens of major service points makes the route expansion strategy financially feasible. Other airlines, he noted, “don’t have the breadth we do.”

BWI is an “anchor” in the expansion strategy, which encompasses both an eastern and western focus, Kelly said. In September, he told the Dallas Business Journal that there are 50 to 70 cities where Southwest could expand in the U.S. and elsewhere in the the Americas.

Though not quite a hub, Southwest considers Baltimore to be a “cornerstone city” in its route network.