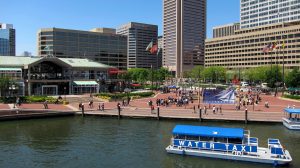 With Harborplace lodged in court-mandated receivership for nearly two years now, an ongoing lack of updates about its status has caused alarm and concern among several downtown stakeholders.

The twin pavilions at Pratt and Light streets today remain mostly vacant and abandoned — a visual eyesore that is the talk of the town. Some say the apparent indifference from IVL Group, the New Jersey-based court-appointed receiver, will hamper efforts for Baltimore’s much-needed, post-pandemic comeback.

The mess recently prompted debate over whether the city could condemn the landmark and acquire it back, a possibility dismissed by the Baltimore Development Corp. in a memo as futile and too expensive. But with a loss of more than 7,000 jobs and an office vacancy rate near 24% since the pandemic hit, many say a new direction for the 40-year-old Harborplace is essential and can’t come fast enough.

“Questions like ‘what do we envision the harbor to be?’ are being asked,” said Shelonda Stokes, president of the Downtown Partnership of Baltimore. “I know it’s a priority in the mayor’s office and the business community is saying we need something to happen there. People remember back to the days of the Fudgery and dancing and singing and being innovative there.”

Donald C. Fry, CEO of the Greater Baltimore Committee, said Harborplace remained a “significant asset” to the city despite its grim status. The development could get a new owner when it emerges from receivership, but even that is uncertain.

“The GBC has been concerned about the court receivership situation with Harborplace and the lack of progress for more than a year,” Fry said. “It is our hope that city leaders work more aggressively with the receiver to bring finality regarding ownership.”

Harborplace plunged into receivership in May 2019. It has a vacancy rate of more than 60% and is facing a number of legal disputes — including a new lawsuit filed in Baltimore City Circuit Court by Johnny Rockets against a subsidiary of Harborplace owner Ashkenazy Acquisition Corp.

The restaurant has shut down and its phone is disconnected. Brett Dieck, an attorney for Sarasaman II LLC, owner of the Johnny Rockets franchise at Harborplace, was unavailable to comment on the ongoing litigation.

Legal action has also been taken by the receiver against the remaining tenants to pay back-rent, which mounted during city-mandated shutdowns because of Covid-19. The February 2021 receivership report filed with the Circuit Court showed that budgeted operating funds posted in the negative.

Concern over Harborplace’s future has surfaced across several platforms of city leadership this spring.

The matter was discussed in detail earlier this month by the BDC’s board, and Mayor Brandon Scott has said he remained focused on the iconic development.

The document detailed the property’s complex ownership — the city owns the waterfront property that the development sits on, yet Harborplace is privately owned by New York-based Ashkenazy, whose ownership was temporarily superseded two years ago by the receivership.

It also shot down a possible takeover of Harborplace by city government based on condemnation.

Ian Lagowitz, president of Montclair, New Jersey-based IVL Group, did not respond to repeated requests for comment this month and has not responded to questions about Harborplace or the receivership since June 2019.

Meanwhile, Fry said downtown remains poised to be reinvigorated — with high hopes for its one-time crown jewel, Harborplace. A nearby $10 million redevelopment of Rash Field is underway and a new Water Taxi terminal is in the works at Pier One.

“The property could be redeveloped into a visionary venue that will serve as a vibrant gathering place for all Baltimore residents as well as a key attraction for visitors from the Baltimore region and elsewhere,” he said. “A reimagined Harborplace would have a significant social and economic impact, and also serve as a boost to the central business district as it recovers from the effects of the pandemic.”