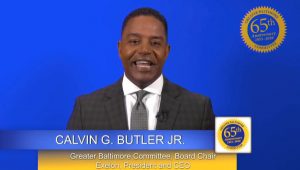 Calvin Butler took the mantle as the new chairman of the Greater Baltimore Committee on October 14 and outlined his vision for how the business advocacy organization will “evolve” and become more of a leader in addressing racial inequities and injustice.

Butler, the CEO of Exelon Utilities and former CEO of Baltimore Gas and Electric Co., is the GBC’s 32nd chairman. He succeeded Paul Tiburzi, a senior partner at DLA Piper who has been the business organization’s chairman for the last three years.

Speaking at the GBC’s annual meeting, Butler described the emotions he felt as a Black man after George Floyd’s death at the hands of Minneapolis police earlier this year. He also questioned how much Baltimore has changed in the five years since Freddie Gray’s death.

“Are we much different?” Butler asked. “What did we do? Money was given and organizations were set up, but what did we really do?”

Business leaders “can’t just keep having conversations,” Butler said, adding that there needs to be “actions and accountability.” He said the GBC, which has served as voice of the regional business community for 65 years, has to “continue to evolve” because it “has a more important role to play than ever before.”

“If we don’t, we’ll get left behind,” Butler said. “Just as I took time out to ask myself what kind of leader I needed to be after George Floyd, we at the GBC have to ask ourselves critically, are we engaging all segments of our city and region to really drive an agenda of equity, inclusion and opportunity? Are we really seeing ourselves as business leaders interconnected with all of our neighbors in all of our communities? Have we fully embraced the idea that we are truly our brother’s and sister’s keeper?”

“We have to be intentional about our efforts to drive change,” Butler said. “We cannot remain static. We cannot remain silent. That to me is how you provide leadership. We are the leaders to do it. Let’s lead by example.”

Social justice was a theme throughout the GBC’s annual meeting. Donald C. Fry, the organization’s CEO, noted a statement the GBC released after Floyd’s death. However, he said “statements are not enough.”

“Moving forward the GBC will work towards solutions to address systemic inequities and to build more equitable and inclusive workplaces,” Fry said.

The GBC honored Diane Bell-McKoy, CEO of Associated Black Charities, with the “Regional Visionary Award” for her work advocating for economic equality and an end to systemic racism.

She called on members of the GBC to invest in organizations like Associated Black Charities and take steps toward dismantling structural racism. Not doing so, she said, “costs us all.”

“Be clear that this is not about investing in something that is a ‘feel good,'” Bell-McKoy said. “This is about an investment and making a difference in the economic outcomes for us in this region. It’s about investing in our greatness and recognizing that [Baltimore] can be an economically great city.”

CNN correspondent Omar Jimenez provided the keynote address. He spoke about his experience as a Black reporter covering the unrest in Minneapolis following Floyd’s death and getting arrested by police on live TV.