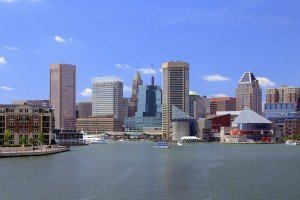 The Maryland Department of Human Services and Department of Health will be the first agencies to move from State Center to downtown Baltimore as part of Gov. Larry Hogan’s push to re-energize the city’s central business district.

Hogan, speaking at McKeldin Square by the Inner Harbor, said the state issued its first request for proposals for the Department of Human Services on April 19. Another RFP for the Department of Health will follow shortly. In total, 12 state agencies with 3,300 total employees will eventually move from their decrepit offices at State Center in Midtown.

Relocating the agencies will provide state employees with higher-quality offices while also providing downtown Baltimore with a much-needed boost, said Hogan, a Republican. During the Covid-19 pandemic, office vacancies have increased 34% in the central business district, he said. He also noted the recent announcements by T. Rowe Price Group Inc. and Bank of America that they will move from downtown to Harbor Point and Harbor East, respectively.

“Over the last four months we have been laser-focused on putting shots into arms; today we are here to talk about a shot in the arm for the recovery and revitalization of downtown Baltimore,” Hogan said. “A strong Maryland depends on a strong Baltimore City.”

Donald C. Fry, President and CEO of the Greater Baltimore Committee, said in a statement that Hogan’s plan will have “a significant economic impact on the many businesses downtown that rely on office workers to stay profitable.”

“It also underscores that the downtown area remains highly attractive as a location to base major office operations and may help attract other tenants,” Fry said.