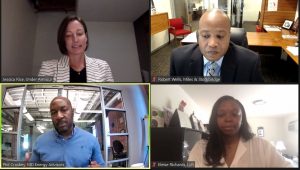 Miles & Stockbridge P.C. has brought on 43 minority-owned businesses as new clients since July when the law firm launched its Black Business & Startup Initiative.

Wells discussed the initiative and its early success during a panel discussion hosted by the Greater Baltimore Committee’s “Bridging the Gap Committee” that focused on how companies are turning statements supporting racial justice into action. Representatives from Under Armour Inc. and Lyft Inc. also participated in the discussion, which was moderated by Maryland Energy Advisors CEO Phil Croskey.

Miles & Stockbridge has been among the leaders in the legal industry when it comes to diversity and inclusion. The firm is led by a woman CEO and uses its own version of the National Football League’s “Rooney Rule,” which requires the firm interview at least one woman, minority or LGBT lawyer for every open position.

As the Black Lives Matter movement gained momentum earlier this year following the deaths of Breonna Taylor and George Floyd, Wells said Miles & Stockbridge wanted to do something outside its internal diversity and inclusion efforts to help address issues faced by Black communities.

“We took action without knowing exactly and precisely what we were going to do, and how we were going to do it and how it was going to work,” Wells said. “To a certain degree we are continuing to build the airplane while it’s in flight, but I am proud that our organization decided to fly.”

Jessica Rice, global head of diversity, equity and inclusion at Under Armour, touted the sportswear maker’s acceleration of its goals. The Baltimore-based company in July announced an array of objectives aimed at supporting “a more diverse and inclusive future.”

Under Armour also said it will ensure that 30% of executive team succession slates are filled by BIPOC, with 12% filled by Black talent, by 2023. Other initiatives include providing employees with more time to volunteer, increasing investments in professional development and training, growing supplier diversity and donating more money to organizations supporting social justice and racial equity.

Eleise Richards, a community strategist at Lyft, said the ride-sharing company has launched several programs related to helping people who live in areas without access to transportation get rides to grocery stores, health care and jobs. The company is also providing free rides of up to $10 to help people vote by taking them to polls or ballot drop-off locations.