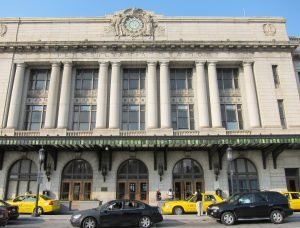 Public and private investment in the ambitious redevelopment of Penn Station and its surrounding neighborhoods could total close to $500 million.

Developers Penn Station partners and Amtrak unveiled the figure, along with new details of the large-scale project that has been retooled over the past several months in the wake of the Covid-19 pandemic, during a March 18 Greater Baltimore Committee online meeting with Baltimore’s business leaders.

It offered the latest glimpse in the ongoing efforts to convert the 110-year-old Beaux Arts train station into a modern-day transit hub anchored by new office and residential space and a high-speed rail line.

“This is really looking to reimagine the future of rail in the U.S. and how the U.S. looks at high-speed rail,” said Brian Traylor, a planner for Amtrak and member of the development team. “Once we do have the system fully deployed, there will be trains that will travel up to 160 miles per hour mph along the Northeast corridor.”

Included in the updates:

The development team outlined the project during the March 18 Greater Baltimore Committee-sponsored webinar that is part of its ongoing Newsmaker series. They showed a series of renderings by design and architecture firm Gensler of the updates and additions to the Penn Station footprint that would convert it into a high-gloss, modern transit hub.