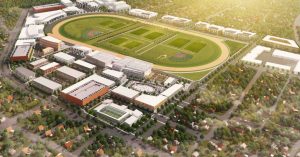 State and city leaders involved in brokering a redevelopment deal for Pimlico Race Course and the Laurel Park race track are feeling confident the plans will continue to move ahead despite the economic uncertainty created by the novel coronavirus.

In an August 26 webinar hosted by the Greater Baltimore Committee, Senate President Bill Ferguson said he’s less anxious about the project’s prospects than he was earlier this spring.

Casino shutdowns from mid-March to mid-June were worrisome, Ferguson said, because revenue from slot machines is slated to pay off the debt service for redevelopment of the tracks in Park Heights and Laurel, a project with an estimated cost of $389 million. Of that total, up to $375 million will be financed by bonds.

But the Senate president has been heartened by robust revenues from the casino industry since Maryland’s six casinos were allowed to reopen at half capacity in June (city officials have since limited Baltimore’s Horseshoe Casino to 25% of its capacity). Three casinos grew their year-over-year revenues in July despite the capacity restrictions, and the industry overall generated $139.9 million last month, a 6.1% decrease compared with July 2019, when there were no limitations in place.

“It looks like that money will continue to be in that ballpark,” Ferguson said. “I feel confident that the finances will be there moving forward.”

Ferguson’s reassurances come after some economists questioned earlier this spring whether the state should pause redevelopment plans, which were hammered out last year before the arrival of Covid-19. Legislators managed to pass a law this spring ratifying an agreement negotiated by representatives of the city, the Maryland Thoroughbred Horsemen’s Association and track owner the Stronach Group, before the pandemic cut the General Assembly session short.

The deal was hailed as a historic agreement that would keep the Preakness Stakes in the city, after a 2019 effort by the Stronach Group to move the Triple Crown race south to the newer Laurel Park race track. Under the plan, the 150-year-old Pimlico Race Course will be razed and rebuilt with a new clubhouse, dirt and turf tracks and 50 acres of new development in the Park Heights community surrounding the track.

Both race track projects are slated to be complete by 2025. William H. Cole IV, the former CEO of the Baltimore Development Corp. and a key negotiator in the Pimlico and Laurel Park deal, said that construction may be able to proceed faster than expected.

“We may be able to shave an entire year off the project and do both Laurel and Pimlico simultaneously,” Cole said. He added that he hopes bonds for the project can be issued in 2021.