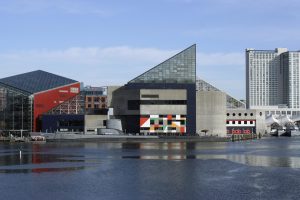 The National Aquarium’s finances are down about $12 million since the start of the novel coronavirus pandemic.

Aquarium CEO John Racanelli shared the numbers during a panel on hospitality and tourism hosted by the Greater Baltimore Committee July 15.

“There’s no doubt that the impact of this pandemic is greater than any challenge that the travel industry in Baltimore and the National Aquarium have faced,” he said.

“I guess the best way to put it is the pandemic has really decimated the travel and tourism industry here in Baltimore City as well as across the country,” he said. “This pandemic, based on data, is about 10 times worse than what 9/11 was. It’s going to take our industry a while to recover.”

Despite the sobering economic realities, all three pointed to some recent bright spots. The Pendry has seen lots of interest from local residents looking for a staycation since it reopened, Webster said, while Kinney noted the Capital Grille has been supported by regular diners who continue to order takeout and dine on-site now that the restaurant is open for table service at reduced capacity.

The aquarium, along with attractions and businesses across the city, shut down in March as cases of the novel coronavirus rose in Maryland. It reopened July 1 after Gov. Larry Hogan moved the state into the second phase of a three-part reopening plan.

For now, it has reduced guest capacity to 25% of normal occupancy. All staff and visitors (except for children under 2 years old) are required to wear face masks, and everyone is screened for a fever before entering the building. Aquarium staff have also mapped out a one-way flow of traffic throughout the building’s exhibits.

Racanelli said he was encouraged by the visitor traffic so far — regularly priced general admission ticket sales are pacing about 30% ahead of expectations, and overall attendance is modestly better than projections, as well.

But the aquarium is still operating at a loss, he said, due to reducing its operating capacity by 75% and having to invest in new temperature screening equipment and other protective gear.

Before it reopened, the National Aquarium was burning about $3.3 million a month, Racanelli said. Unlike other institutions, which have relatively low overhead when their doors are closed, the aquarium faced “a unique challenge” that kept operating costs high: the need to care for marine life. And the closure came during a time “that we’re usually ramping up to welcome hundreds of thousands of visitors,” he said.

While it was closed to the public, the aquarium focused on virtual programming, such as live camera feeds of its exhibits, weekly question-and-answer sessions with experts and free at-home activities for kids. Its exhibit fabrication team learned to make face shields using the aquarium’s 3D printer and produced about 1,000 shields for local hospital staff.

Despite the recent financial challenges, Racanelli said he was confident the aquarium would endure.

“We’ve been a significant part of the tourism fabric of this city as both its tourism product and its culture for 40 years, and I’m confident we’re going to continue to be for the next 40,” he said.