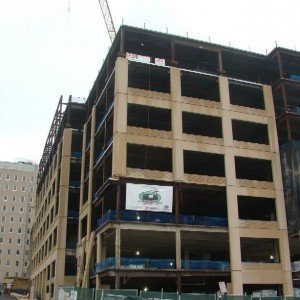 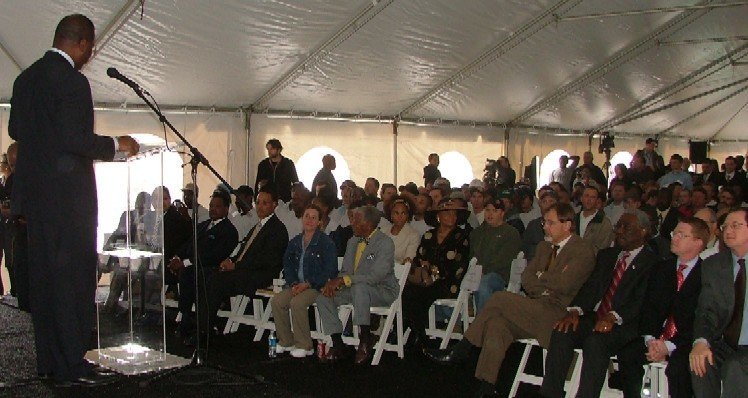 More than 150 business and government leaders joined construction craftspeople on April 27 to celebrate the “topping off” of the first building in the Science and Technology Park at Johns Hopkins on Baltimore’s east side.

Guests at the ceremony signed the final beam, which was hoisted to the top of the building at 855 Wolfe Street after a ceremony commemorating the event.

The Rangos Building, along with a 74-unit senior apartment complex and a 78-unit workforce housing complex, are the first buildings under construction in the 30-acre first phase of the massive east side biopark and neighborhood revitalization project that will ultimately consume 80 acres north of the Johns Hopkins. More than 6,000 jobs will be created, experts estimate.

The project is strongly supported by the GBC, for which bioscience business develop in the region is a top strategic priority.

“No community can grow and thrive without an economic engine,” Harbor Bank President Joseph Haskins, a GBC member and former GBC board vice chair, said in praising the value that the presence of Johns Hopkins University and Medical Institutions brings to the east side, city and state. Haskins serves as chairman of East Baltimore Development Inc., the nonprofit entity that is managing development of the east side biopark and neighborhood revitalization.

GBC board member Dr. Edward D. Miller, CEO of Johns Hopkins Medicine, commented on the project’s scientific potential. The Hopkins School of Medicine’s Institute for Basic Biomedical Sciences will be the anchor tenant in the Rangos Building.

The institute conducts “the kind of work that is the foundation of all great progress in medicine,” said Miller. “The idea is to get off the paths already walked and to forge new ones.”

“It’s not just the building. It’s what’s going to happen inside the building,” said Congressman Elijah E. Cummings, noting the potential for current research on diseases such as pancreatic cancer and AIDS. “We may find all kinds of things that will help people live better lives.”