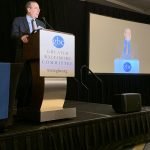 Federal Reserve Bank of Richmond President Thomas Barkin says the central bank has taken out “insurance” against uncertainty facing the U.S. economy by cutting interest rates three times and “I hope we will see over the next six months the kind of impact you want to have.”

“I think it is a good time though to pause.”

Barkin talks with reporters Tuesday after speech to the Greater Baltimore Committee.

“We have decided to take rates down 75 basis points to protect against weakening coming from this uncertainty. So if we get either no weakening or the modest kind of weakening that we expect, then I think we have taken out the insurance that we would take.”

Note: Barkin is not a voter this year on the rate-setting FOMC