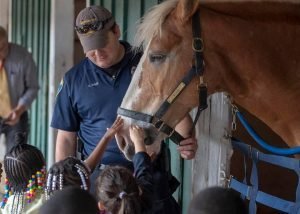 For more than 100 years, the Baltimore Police Department’s Mounted Unit has patrolled the streets of Baltimore City, keeping residents, tourists and others safe.

In fact, it’s the oldest continuously operated horse-mounted police unit in the U.S.

After police officers in the unit make their rounds each day, they ride the horses back to their stables, located under the Jones Falls Expressway in the 500 block of Holiday Street.

But soon the horses will move to a new home thanks to more than $2 million raised through donations and other sources. Less than a year after construction began in September 2018, the mounted unit will relocate to stables at the B&O Railroad Museum, located at 901 W. Pratt Street in Southwest Baltimore.

The horses will reside at what’s known as First Mile Stable – so named because the first mile of commercial railroad in the U.S. was laid at the B&O. While the unit used to have as many as 25 horses, it currently has just six: Big D, Hercules, Pax, Porter, Slurpee and Blair.

The Mounted Unit is looking forward to moving to the new stables, as it will give the horses room to graze while being connected to a specific community.

“The new stables will allow our mounted unit to not only patrol this neighborhood, but become residents of the neighborhood,” Det. Silbert said.

The B&O Railroad Museum is looking forward to First Mile Stable opening as well, as its history ties back to the beginning of the B&O Railroad. The first trains were pulled by horse. Once steam engines ruled the rails, Baltimore passed a law preventing them from coming into the city. As a result, horses kept at B&O Stables would meet the locomotives and pull the cars into the city.

“We think of it as bringing the stables back,” said Kris Hoellen, Executive Director of the B&O Railroad Museum.
The renovated stable will contain 12 stalls for horses, locker rooms, offices for the patrol officers, and a learning center that the B&O will use to educate children about career pathways associated with the police department and horses. In addition, First Mile Stable will be a new stop on the B&O train ride for visitors and tourists. It runs once daily from the historic roundhouse to the B&O Restoration Facility, said Hoellen.

The B&O hopes to partner with the business community to provide more programming for the education programs that will be offered once the stable opens.

The B&O and the police department believe that having the horse stable at the new location will help reduce crime and build trust in the community.

In addition, said Hoellen, “The stables will help recruit, attract, and retain employees for businesses in the area.”

The B&O has raised a total of $2.2 million of their $3 million goal for the project. Businesses and other benefactors have the opportunity to help the B&O’s First Mile stable project and the mounted unit by providing funding. Donations can also be made for the police department to purchase horses. In addition, there are opportunities for donors to name the classroom, paddock, exercise arena, stalls and other parts of the new facility.

More information can be found here