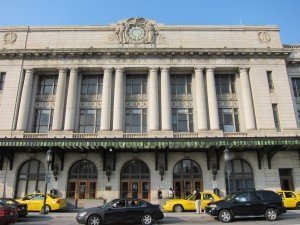 Editor’s note: The following commentary appeared on CenterMaryland.org on April 15, 2016.

In late February at a Congressional committee hearing with Amtrak officials, U.S. Rep. Elijah E. Cummings expressed frustration that Amtrak hasn’t made much progress toward creating concrete plans to redevelop and upgrade Penn Station in Baltimore.

“We need that station to be an economic engine,” Cummings was reported by The Baltimore Sun to say at the February 26 hearing of the House of Representatives’ Committee on Oversight and Government Reform.

“For nearly a decade there have been many fits around the station without any actual starts. … In no way does it serve as the anchor point for Baltimore that it could and should be,” Cummings said.

The Maryland congressman was in some ways channeling the frustration that many in the Baltimore business community feel about Penn Station. Updating the station is a project that is long overdue.

The five Amtrak-owned land parcels totaling 37 acres that are either adjacent to or near the station are underutilized and hold enormous unlocked potential.

Currently the inside of the station barely merits taking a photo to share with friends and relatives as one waits to board a train to go to work in Washington, D.C. or head to New York for the weekend.

But if you look at how Denver’s Union Station was “re-imagined” and redeveloped with an eclectic array of shops, restaurants and more, you get a sense of what’s possible.

Penn Station could be a lively welcoming place for commuters and tourists alike.

A number of ideas have been kicked around for years by Amtrak to bring new glory and life to Penn Station, but the plans tend to languish or fall by the wayside.

But this past week a cautiously optimistic tone began to emerge on the future of Penn Station.

At a meeting of Amtrak officials with the Greater Baltimore Committee’s Transportation & Mobility Committee and its Economic Development Committee, Amtrak said it plans to move forward in the not too distant future with requesting bids from private industry groups interested in serving as a “master developer” for the train station and the adjacent land parcels it owns.

At the congressional committee hearing when Congressman Cummings expressed his frustrations, Amtrak officials disclosed that they’d received nine responses from private entities to a Request for Information. An RFI is essentially a way to “test the waters” to see if there is serious interest in a project that may lead to a legitimate bid proposal.

Amtrak hasn’t disclosed the identities or any specifics of the nine responses received. But this early strong interest – and the Amtrak plans to keep the process moving toward requesting actual request for bids – is a promising sign.

Amtrak officials told the GBC committees that they plan to release additional details after the city and state transportation officials are updated on the project later this month.

These upcoming meetings present a good opportunity for state and local elected officials to press Amtrak officials to fully commit to improvements at Penn Station and a leveraging of the potential in the Amtrak-owned real estate nearby.

The public-private partnership concept that Amtrak proposes with the utilization of “master developer” has  merit and should be pursued.

Additionally, elected officials must make it clear that is a priority project and that it is imperative that work gets started in the next three years.

The Greater Baltimore Committee has been urging Amtrak for a number of years to upgrade and improve Penn Station and the surrounding Amtrak-owned property.

The reason is clear: There’s enormous potential and opportunity in Penn Station and the associated land parcels when you consider all the development and synergy that is near the station.

The bustling University of Baltimore and Maryland Institute College of Art are just down the street and the emerging Station North arts district is around the corner.

Improvement of the existing Penn Station and the  development of the nearby Amtrak-owned land sites would serve as an economic boost to this growing part of the city.

Penn Station is the eighth busiest station in the Amtrak network with about 1.1 million riders a year, many of them commuters shuttling between Baltimore and Washington, D.C. and other stops along the busy Northeast Corridor.

The thousands of Amtrak customers that frequent the station for short or extended periods of time deserve a modern, welcoming and comfortable rail station.

It is also worth noting that for those who travel to the city by train rather than by vehicle or air, Penn Station represents their “first impression” of Baltimore. It is a heavily used gateway to Baltimore City that needs significant improvement.

The public-private partnership model holds the potential of a modern, welcoming “new” Penn Station would serve as a positive first impression for visitors to experience, and a landmark for Baltimoreans to be proud.

This time it is important that all stakeholders join together to ensure that Amtrak concepts and plans for a new Penn Station don’t remain on the books but become actionable construction plans that make the improved gateway to Baltimore City a reality.

Donald C. Fry is the President and CEO of the Greater Baltimore Committee. He is a regular contributor to Center Maryland.