CEOs You Should Know, presented by Howard Bank and hosted by John Dinkel, features local CEOs in the Baltimore area. Listen in on 93.1 WPOC, 102.7 JackFM, and Z104.3 every Tuesday morning to hear the interviews. 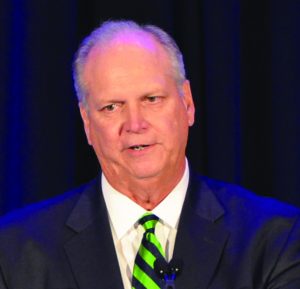 Fry is deeply committed to improving the relationship between business leaders and lawmakers to promote a competitive business environment and economic growth statewide. During his time at the GBC, Fry has been actively engaged in major victories for the Greater Baltimore business community including recent efforts to keep Preakness at Pimlico and advocating for Howard Street Tunnel funding.

Successful GBC initiatives under Fry’s leadership include the founding of the Bridging the Gap program, which is dedicated to developing and fostering relationships between majority, minority and women-owned businesses to promote diversity, equity and inclusion. He also led the study that produced the 2010 GBC report, Gaining a Competitive Edge: Keys to Economic Growth and Job Creation in Maryland, which outlines eight core pillars to foster job creation and economic growth in the state. Fry also launched the Coalition for a Second Chance and Baltimore Women’s Advisory Board during his time serving as President and CEO. Fry continues to lead efforts to advocate for a modernized and adequately funded regional transportation system in greater Baltimore.

Fry has received various awards including being a three-time recipient of the Influential Marylander in Civic Leadership award, which led to his induction to the Circle of Influence by The Daily Record. He has also been recognized as The Daily Record’s Innovator of the Year; one of Maryland’s Most Admired CEOs by The Daily Record; and a Power 10 CEO by the Baltimore Business Journal.

Fry was engaged in a private law practice in Harford County from 1980 to 1999. He served in the Maryland General Assembly as a member of the House of Delegates and the Senate of Maryland. During his tenure in the state legislature, Fry served on several committees and subcommittees. He is one of a handful of legislators who has served on all of the key budget committees.

Listen to the interview here.