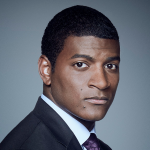 Omar Jimenez is a CNN National Correspondent based in Chicago.

In his first year as a National Correspondent, he was the lead reporter in the death of Kobe Bryant, covered the COVID-19 pandemic from the front lines beginning in March at a nursing home in Washington, and was at the forefront of numerous protests within the Black Lives Matter movement, including the death of George Floyd. He and his crew were arrested on live television in Minneapolis while covering protests in the city after Floyd’s death.

Jimenez started with CNN in 2017 for the network’s affiliate service, CNN Newsource, based in Washington, D.C. While there, he covered breaking news stories for CNN’s more than 900 affiliates nationwide.

Prior to joining CNN, Jimenez worked for WBAL-TV in Baltimore, where he was a reporter and fill-in anchor. While there, he received an individual Emmy nomination for general assignment reporting.

He graduated from the Medill School of Journalism at Northwestern University, where he also played on the varsity men’s basketball team.

ABOUT THE GREATER BALTIMORE COMMITTEE: