Description: The Public Safety Committee seeks to identify and examine emerging public safety issues, the impact on employers/employees and customers/clients, and works with appropriate stakeholders to affect positive change in Baltimore City and the surrounding counties. The committee also examines best practices from other cities in order to better inform public safety policy.

The Public Safety Committee, co-chaired by Kurt Schmoke and William H. “Willy” Moore, met on September 13, 2021, and received multiple briefings regarding law enforcement and safety updates in Baltimore City. The first presentation was given by Thomas R. Akras, Chief of Operations Management for Downtown Partnership of Baltimore. The presentation focused on crime updates in downtown Baltimore, which included statistical breakdowns that highlighted fluctuating crime rates based on month and time of day. Deputy Commissioner Jim Gillis gave a report on the Baltimore Police Department’s Recruitment and Retention of Police Officers, which highlighted both the strategies and challenges to increasing BCPD recruitment and retention. Additionally, Amos Gelb, Publisher for the Baltimore Witness Program, addressed some of the trials associated with prosecuting violent crime in Baltimore, especially data collection and case backlog issues.

The Public Safety Committee met on January 5, 2021, and received an overview of the Report of the Commission to Restore Trust in Policing. Commission members Judge Alexander Williams, former United States District Judge of the United States District Court for the District of Maryland, and Sean Malone of Harris Jones & Malone, provided background on the commission’s work and some of the key findings and recommendations in the recently released 184-page report. The commission was established by state legislators two years ago to primarily investigate the root causes of criminal misconduct by members of the Baltimore City Police Department’s Gun Trace Task Force. Judge Williams, who chaired the commission, and Malone noted that the report includes more than 40 recommendations to improve integrity and accountability in the police department, such as measures designed to detect and deter officer misconduct, ethics training, citizen participation in the review of complaints filed against police officers, as well as reconstituting the Baltimore City Criminal Justice Coordinating Council. They also noted that the report recommends reforms to the state’s Law Enforcement Officers’ Bill of Rights, which the Maryland General Assembly is expected to discuss as part of a broader debate regarding police reform during the 2021 session, which begins January 13.

The Public Safety Committee met on November 18, 2020, and received a briefing from Daniel Webster, Bloomberg Professor of American Health and Director of the Johns Hopkins Center for Gun Violence Prevention and Policy.  Webster focused his remarks on three issues in regard to evidence-based strategies for reducing gun violence in Baltimore:

Webster drew upon findings from recent studies that he led, “Reducing Violence and Building Trust: Data to Guide Enforcement of Gun Laws in Baltimore” and “Estimating the Effects of Law Enforcement and Public Health Interventions to Reduce Gun Violence in Baltimore.”

The Public Safety Committee met on September 9, 2020, and received a briefing from Senator William C. Smith, Jr., Chair of the Senate Judicial Proceedings Committee in the Maryland General Assembly. Senator Smith, who represents District 20 in Montgomery County, was named Chair of the Senate Judicial Proceedings Committee in 2019. He briefed the Public Safety Committee on a variety of issues, including the status of crime reduction legislation and police reform and accountability proposals being considered by the legislature. Senator Smith said the Judicial Proceedings Committee will hold three consecutive days of public hearings beginning September 22 to hear testimony on police reform and accountability proposals, many of which have already been drafted. Senator Smith said that these virtual hearings are unlikely to be followed by a special session to address police reform and accountability. Instead, the Maryland General Assembly will more likely address police reform when they meet again for their regular 90-day session, which begins on January 13, 2020.

The Public Safety Committee met on July 15, 2020, and received a briefing from Kenneth Thompson, Partner at Venable and Monitor of the Consent Decree between Baltimore City and U.S. Department of Justice (DOJ).

On April 7, 2017, the City of Baltimore and the DOJ entered into a Consent Decree, which is a court enforceable agreement to resolve DOJ’s findings that it believed the Baltimore City Police Department (BPD) had engaged in a pattern and practice of conduct that violates the U.S. Constitution and some provisions of federal law. Under the Consent Decree, the City of Baltimore and the BPD will work with communities to implement comprehensive reforms.

Thompson stated that he thinks the BPD now has some of the best policing policies in the country and is continuously instituting best practices from nationally recognized well-run police departments. The BPD is now developing new curriculums and training starting with use of force. Thompson also described the Consent Decree as a forward-looking document and a blueprint for police reform and accountability measures following the death of George Floyd.

The Public Safety Committee held a meeting June 11, 2020, featuring a briefing from Delegate Vanessa Atterbeary on the newly formed Workgroup to Address Police Reform and Accountability in Maryland. Delegate Atterbeary, the Vice-Chair of the House Judiciary Committee, has been named the chair of the Workgroup. Delegate Atterbeary said the Workgroup will begin with an organizational meeting on June 23, 2020, and hold several more meetings before issuing recommendations for legislation to be introduced in the 2021 legislative session of the Maryland General Assembly.

The Public Safety Committee also held a discussion about a separate set of policing reform recommendations offered by Senator Will Smith, the Chair of the Senate Judicial Proceedings Committee. These recommendations are currently in the process of being drafted into legislation. Once drafted, Senator Smith plans to hold public hearings with the Senate Judicial Proceedings Committee and introduce some or all the proposals in the 2021 General Assembly Legislative session.

The GBC Public Safety Committee held a virtual meeting on May 14, 2020. The meeting featured a briefing on the Baltimore Police Department’s (BPD) Aerial Investigation Research (AIR) pilot program, which began flying on May 1, 2020. The briefing included remarks by Ross McNutt, President of Persistent Surveillance Systems and BPD representatives Eric Melancon, Chief of Staff; Drew Vaught, Managing Director of Data Driven Strategies; Lieutenant Kimberly Grinage; and Deputy Commissioner Michael Sullivan. This pilot program is the first of its kind in the nation. The AIR pilot program, which has one plane flying currently, will eventually consist of three planes. The goal of BPD is to find out if this is evidence-based and data-driven information that will be a resource to its officers by measuring impacts on deterrence and clearance rates.

The GBC Public Safety Committee met on February 14, 2020, and received a briefing from Baltimore Police Department (BPD) Deputy Commissioner Michael Sullivan. Deputy Commissioner Sullivan, who previously spent most of his career working in the Louisville Metro Police Department, provided an overview of his role within the BPD, which includes criminal investigations, patrol and operations. He also briefly discussed crime statistics in relation to violent crimes, which he said slowed down in the second half of 2019. Deputy Commissioner Sullivan also answered questions from Committee members on a variety of topics including officer recruitment, police technology, strategic decision support centers, focused deterrence and aerial surveillance.

The GBC’s Public Safety Committee and Coalition for a Second Chance welcomed Baltimore City Associate District Court Judge Nicole Pastore on January 22, 2020, to provide an update on the Baltimore City District Court Re-Entry Project. The project connects Baltimore City residents with job opportunities and job and educational training and is designed to be an alternative to incarceration and to reduce recidivism.

On December 11, 2019, members of the GBC Public Safety Committee and the Coalition for a Second Chance welcomed Maryland House Judiciary Chairman Luke Clippinger to a joint committee meeting to discuss legislative priorities for the 2020 Session and strategies for improving public safety in Baltimore City and across Maryland.

The Greater Baltimore Committee Public Safety Committee met on October 30, 2019. The featured guest was Ganesha Martin, Director of the Mayor’s Office of Criminal Justice. Martin provided a presentation on her office’s priorities to reduce violent crime and her vision to improve public safety in Baltimore City. The role of the Mayor’s Office of Criminal Justice is to advise the Mayor on all crime reduction and criminal justice strategies. Martin, who in March returned to public service after previously serving in public safety roles in Baltimore City, said she is primarily focused on five general concepts — prevention, intervention, enforcement, rehabilitation and reentry. She said Baltimore City will seek to emulate effective and successful crime reduction strategies that Baltimore Police Commissioner Michael Harrison implemented in New Orleans during his tenure there as police chief.

On July 30, 2019, the Greater Baltimore Committee’s Public Safety Committee held a meeting featuring a presentation by ShotSpotter. ShotSpotter is a company that employs detection technology used by police departments to locate gunshots. The technology is presently used in West Baltimore and East Baltimore through a one-year grant from the Bloomberg Foundation. With ShotSpotter, police can quickly ascertain how many rounds were fired, the location of the gunfire, whether there are single or multiple shooters and the sequence of shots fired.  In Baltimore City, ShotSpotter detected 5,000 rounds fired and 1,438 incidents in the first six months of operation. The Baltimore Police Department is considering whether to expand the use of ShotSpotter into other areas of Baltimore City.

Hymowitz was joined by Eric Melancon, the new Chief of Staff to BPD Commissioner Michael Harrison. Hymowitz and Melancon discussed with the Public Safety Committee best practices for increasing the quality and quantity of recruits to serve as officers in the BPD. Through evidence-based efforts, partnerships and innovative methods, the BPD is implementing new recruiting and retention tools in an effort to bolster public safety. 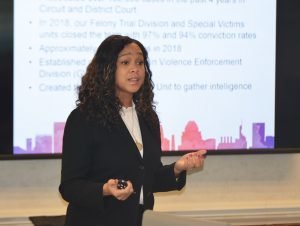 Baltimore City State’s Attorney Marilyn Mosby met with the GBC’s Public Safety Committee at its February 19, 2019 meeting. Mosby said that attorneys from her office have prosecuted more than 150,000 cases during her first year in office; nearly 49,000 cases in 2018. Mosby said that her administration has prioritized victims and witness intimidation efforts, which includes federal funding and grants. The office has also increased efforts to make victims of trauma and crime feel more comfortable.

Mosby’s office is also focused on investing in youth, particularly as juvenile crime has trended upwards over the past several years. The number of juveniles who have been charged as adults has also increased. She also explained that her office has created a policy and legislative affairs division and successes include the 2018 Repeat Sexual Predator Prevention Act.