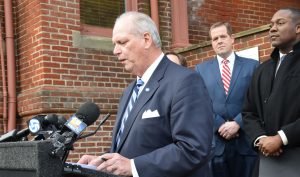 The Greater Baltimore Committee, the Mayor of Baltimore’s office and the county executives of Anne Arundel, Howard and Baltimore counties highlighted the importance of regional cooperation and planning as well as investing in the Baltimore region’s transportation network at a press conference in Annapolis on February 12, 2020.

See coverage from the event here:

Maryland Matters: ‘We Have to Get Things Moving’: Baltimore-Area Leaders Urge Transit Boost

Watch the press conference on Facebook Live at facebook.com/GBCorg.