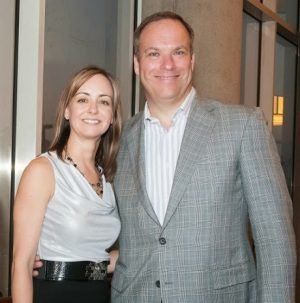 The George Washington University (GW) Office of Innovation and Entrepreneurship  announced that the GW School of Engineering Applied Science (SEAS) alumni, Vicki and Karl Gumtow (BS ‘91 and ‘92), co-founders of CyberPoint, were awarded the 2017 Distinguished Entrepreneurial Achievement Award (DEAA) at the GW New Venture Competition in the Jack Morton Auditorium on April 20, 2017.

The DEAA is awarded by the GW Entrepreneurs Round Table (GWERT) and the GW Office of Innovation and Entrepreneurship annually for recognition of notable achievements and success in the field of entrepreneurship. As CEO and Director of Shared Services respectively, Karl and Vicki were selected as this year’s recipients because of their leadership in and support of the cybersecurity community through funding, mentorship, training, and educational programming.

“Eight years ago, the Gumtows launched CyberPoint, a cyber security company that provides technical consulting and services for cyber security issues worldwide. They started with five employees and operated out of their condo,” said David Dolling, Dean of Engineering and Applied Science at GW. “CyberPoint now employs more than 200 people and had 2015 revenue of $60 million.”

CyberPoint expanded through a series of successes including the launch of The CyberWire, a daily digest of global cyber security critical news; acquisition of Bitmonix; addition to Lockheed Martin’s Cyber Security Alliance; and recipient of a $5.4 million DARPA contract. CyberPoint has received numerous awards and recognitions including being listed among Inc. Magazine’s 5,000 fastest growing privately held companies and one of the Best Places to Work by Baltimore Magazine.

In addition to their recent success and growth, Karl and Vicki Gumtow continue to support a number of initiatives and organizations that help to advance women leaders in business, government, and academia. They have pledged $1 million to establish a charitable endowed fund through the Baltimore Community Foundation to support educational initiatives primarily, but also the arts and economic development.

“Vicki and Karl Gumtow’s work in cyber security is vital in this day and age, and they have launched products that can help protect organizations around the world,” said Dr. Dolling. “They have distinguished themselves professionally, and also philanthropically, on behalf of the people of Baltimore, the city they call home. They are truly deserving of the Distinguished Entrepreneurial Achievement Award.”

Karl Gumtow is a member of the Greater Baltimore Committee’s Board of Directors.