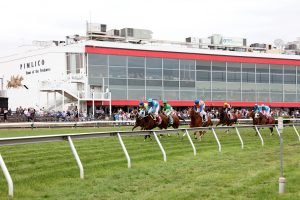 In an op-ed that appeared in the Baltimore Business Journal on February 5, I called on the Maryland General Assembly to approve the deal to upgrade Pimlico Race Course, improve the neighborhood around Pimlico, and to keep the Preakness in Baltimore City. With this week’s introduction of SB 987/HB 1056 — Racing and Community Development Act of 2020, legislators are poised to do just that.

SB 987/HB 1056, sponsored by Senate Budget and Taxation Committee Chair Guy Guzzone and Speaker of the House Adrienne Jones respectively, have not yet been scheduled for a hearing, but when hearings are scheduled, the GBC will be there in strong support. The proposal has already received strong support from executives in Baltimore City, Anne Arundel County and Baltimore County, as well as legislative leaders from both parties in the legislature.

The bills, which are largely similar to an agreement hatched after the close of the 2019 legislative session of the Maryland General Assembly, create a funding source to make racetrack upgrades by authorizing up to $375 million in debt for both Pimlico and Laurel racetracks through bonds sold by the Maryland Stadium Authority. While the improvements are occurring, the Preakness will continue to be held at Pimlico.

In the op-ed, I pointed out that the GBC, as business and civic leaders representing the Greater Baltimore region, honors the tradition of horse racing in Maryland and recognizes the significant economic impact that the Preakness brings to the region each year. The agreement and corresponding legislation are a “win-win” for all involved parties and the GBC commends the commitment and dedication of the negotiating parties to reach a solution that benefits multiple communities, enhances horse racing, and preserves the Preakness in Baltimore City.

The GBC urges the Maryland General Assembly to recognize the significance of this proposal that seeks to preserve Maryland’s horse racing industry and the Preakness tradition, and pass SB 987/HB 1056.