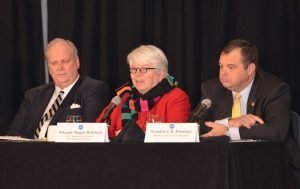 The speakers addressed a wide range of issues with a focus on what is important to the Greater Baltimore region. Nearly 300 attendees heard about matters ranging from public safety and violent crime in Baltimore City to the effect of federal tax changes on Maryland’s taxpayers. The panel also touched on important policy issues such as health care costs, education funding, innovation and economic development.

The GBC will be active throughout the legislative session, serving as the voice of business and protecting Maryland’s competitive business environment. To follow the GBC’s work in Annapolis, visit our legislative tracking page.