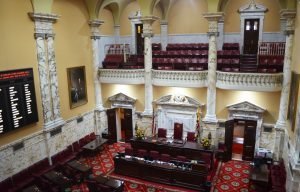 Since the 2001 session, the General Assembly has not passed individual bond bills but has instead included bond bill projects in the annual capital budget. In keeping with this institutionalized process, starting in the 2019 session, “worthy legislative initiatives” will no longer require separate legislation but instead will be handled as requests for amendments to the capital budget bill called “Legislative Bond Initiatives” (LBI). They will not receive bill numbers, and will be introduced on a separate bond initiative calendar.

Although the LBI process will mirror the bond bill process in many ways, the General Assembly leadership believes the elimination of individual bond bills will result in a more efficient use of resources and a clearer process for members and the public. The basic eligibility requirements and evaluation criteria for bond initiatives have not changed, and the request guarantee date and introduction dates for bills will also apply to the LBI process.

This is just one change in the legislative process. New committee chairs announced additional reforms at their organizational meeting. Knowing the rules and procedures are an integral part of the legislature for both members and advocates.