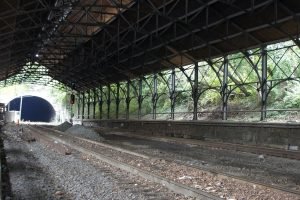 The GBC is delighted to share that funding is in place for the expansion of the Howard Street Tunnel, a critical project and longtime priority of the Greater Baltimore Committee (GBC). The GBC has advocated for the expansion of the Howard Street Tunnel for more than a decade because the double-stacking capacity for freight rail will strengthen the economic competitiveness of the Port of Baltimore and result in significant economic growth and job creation for the region. We applaud the collaboration of the public and private entities whose persistence has made it possible.

To fund the $466 million project, the State of Maryland and CSX, the owner of the Howard Street Tunnel, received a $125 million federal grant. The State had previously agreed to commit $147 million and CSX had committed $91 million, leaving a $103 million funding gap for the project. The Hogan Administration and CSX worked together to identify a variety of funding sources to close the remaining funding gap and get the project underway.

We commend Governor Hogan, state transportation officials, and CSX for their leadership in identifying the funds needed to advance this project of tremendous significance to the Baltimore region.